4 Protection System Protection refers to a mechanism for controlling access by programs, processes, or users to both system and user resources The protection mechanism must: distinguish between authorized and unauthorized usage specify the controls to be imposed provide a means of enforcement

5 Command-Interpreter System
Many commands are given to the operating system by control statements which deal with: Process creation and management I/O handling Secondary-storage management Main-memory management File-system access Protection Networking

6 Command-Interpreter System (Cont.)
The program that reads and interprets control statements is called variously: command-line interpreter shell (in UNIX) Its function is to get and execute the next command statement

7 Process Management Creation/deletion of a process
Create and make available, an execution environment Suspension/resumption and CPU scheduling in a fair manner Mechanisms for synchronization Mechanisms for inter-process communication Deadlock handling

8 Operating System Services
Program execution – system capability to load a program into memory and to run it I/O operations – since user programs cannot execute I/O operations directly, the operating system must provide some means to perform I/O File-system manipulation – program capability to read, write, create, and delete files Communications – exchange of information between processes executing either on the same computer or on different systems tied together by a network. Implemented via shared memory or message passing Error detection – ensure correct computing by detecting errors in the CPU and memory hardware, in I/O devices, or in user programs

9 System Calls System calls provide the interface between a running program and the operating system Generally available as assembly-language instructions Languages defined to replace assembly language for systems programming allow system calls to be made directly (e.g., C, C++) Three general methods are used to pass parameters between a running program and the operating system Pass parameters in registers Store the parameters in a table in memory, and the table address is passed as a parameter in a register Push (store) the parameters onto the stack by the program, and pop off the stack by operating system

10 Virtual Machines A virtual machine takes the layered approach to its logical conclusion. It treats hardware and the operating system kernel as though they were all hardware A virtual machine provides an interface identical to the underlying bare hardware The operating system creates the illusion of multiple processes, each executing on its own processor with its own (virtual) memory

11 Virtual Machines (Cont.)
The resources of the physical computer are shared to create the virtual machines CPU scheduling can create the appearance that users have their own processor Spooling and a file system can provide virtual card readers and virtual line printers A normal user time-sharing terminal serves as the virtual machine operator’s console

13 Advantages/Disadvantages of Virtual Machines
complete protection of system resources since each virtual machine is isolated from all other virtual machines. This isolation, however, permits no direct sharing of resources. a perfect vehicle for operating-systems research and development. System development is done on the virtual machine, instead of on a physical machine and so does not disrupt normal system operation. difficult to implement due to the effort required to provide an exact duplicate to the underlying machine 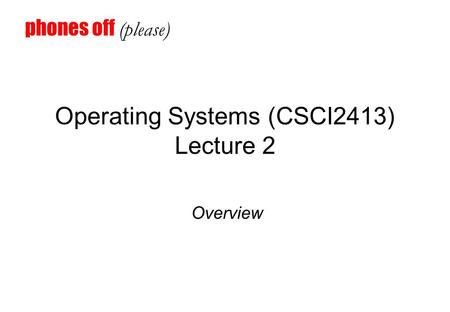 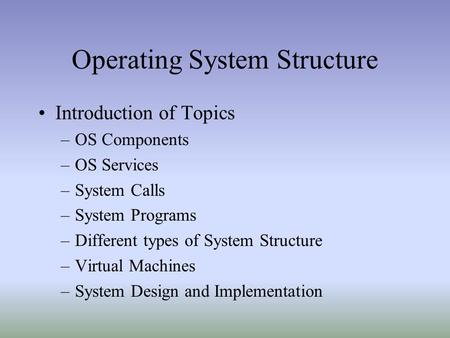 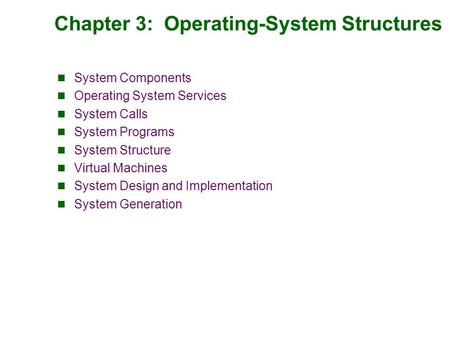 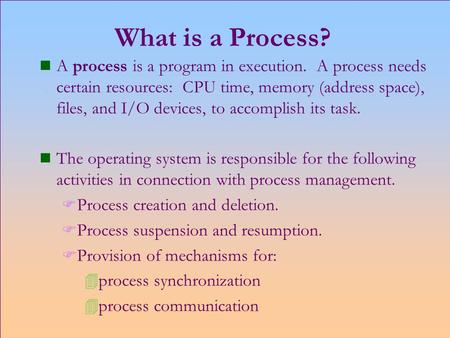