Presentation on theme: "Of Mice and Men POWER As it was the Great Depression and men were travelling around for work, leading a very lonely existence, in search of the American."— Presentation transcript:

1 Of Mice and Men POWER As it was the Great Depression and men were travelling around for work, leading a very lonely existence, in search of the American Dream, it meant that very few people had any power or control over their own destiny. And yet, power shows itself in many different ways – as you can see when you look at who has power – and what kind.

2 Lennie He has more physical power than mental, for example, when he broke Curley’s hand . This is why he is easily led because George told him to fight back against Curley and he did and when George tells him to stop he does. He isn't very powerful because he needs George to look after him and tell him what is right and what is wrong. He is also very easily led - an example of this would be when George told him to jump into a river and he did it. I turns to lennie and says ‘jump in’ an’ he jumps.” He is also very childlike, naive and doesn’t know or remember much. This is another reason why he doesn’t have as much power. This is a quote showing this ‘ well, I can go away,’ (to a cave) which shows that he has no concept of what he physically can and cannot do.

3 George He has a lot of power over Lennie, for instance, ‘for god sakes don’t drink so much’. He can make Lennie do anything he wants him to do. Once he told Lennie to jump into a river and he did it. Another time when he has power over Lennie is when he told him to fight back against Curley and he did and as a result Lennie broke Curley’s hand. George has more mental power than some of the people on the ranch as he is clever and has common sense because when he walked into the barn after Lennie killed Curley’s wife he knew what he had to do: “‘now you listen. The guys might think I was in on it. I'm gonna go in the bunk house “ - this shows his intelligence.

4 Slim Slim has the most power on the ranch out of the workers. Whatever he thinks gets respect because they look up to him and respect him. When Carlson wanted to shoot Candy’s dog , Candy turned to Slim to see what he thought. "Never you mind. A guy got to sometimes“. This is Slim trying to comfort George because he killed Lennie. This shows that he is quite powerful because it is working and that he is quite a caring person.

5 Curley’s wife Curley’s Wife is described as ‘jail bait’.
She only has power at the scene in Crooks’ bunkhouse and she threatens Crooks by saying she could get him into trouble. She doesn’t have much power because she is a woman and men were classed as more important at the time.

6 Crooks Crooks is the black stable buck so he has almost no power (as black people were seen as lower than white people in the 1930s), but when the men go out on Friday he gets left behind with Lennie, Candy and Curley’s wife. This shows that they are the weaker characters so they do not have as much power, but Lennie goes into Crooks’ room and Crooks has power “I said s’pose George went into town tonight and you never heard of him no more”. Crooks pressed forward some kind of private victory, “just suppose that” he repeated. “He wont do it” Lennie cried. “George would do nothing like that. I’ve been wit George a long time. He’ll come back tonight” but the doubt was too much for him. “don’t you think he will?”

7 Curley He only has power over the people who don’t know him and the people who are mentally or physically weaker than him. He is one of the people who has the least power on the ranch. However, he only has power in the way that he is the boss’s son and wont get sacked. As a result of this he thinks he can go around the ranch intimidating the weaker people. He also acts like he is better and bigger than he is.

8 Candy Candy doesn’t have much power In the book.
He has no right hand so he can’t do any work apart from sweeping and doing basic stuff. He isn't that important to the team because of this. "I ought to of shot that dog myself, George. I shouldn't ought to of let no stranger shoot my dog." This shows that he is feeling guilty for giving in to let someone else shoot his dog instead of him. Now he is regretting his decision. Slim also influenced him to let his dog get shot. Candy doesn’t therefore have much power over even his own actions and decisions – other people overpower him.

9 The boss He has the overall power in the book even though he is only mentioned once. He owns the ranch and has the power to hire and fire. He has a lot of power because the workers dream of their own ranch but he all ready has the dream.

Download ppt "Of Mice and Men POWER As it was the Great Depression and men were travelling around for work, leading a very lonely existence, in search of the American." 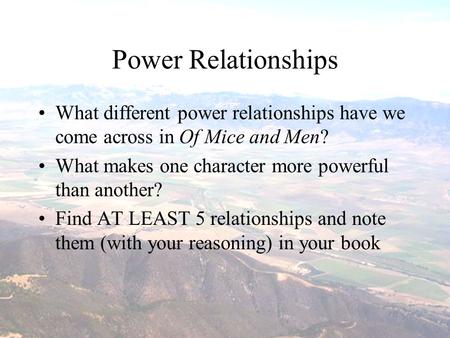 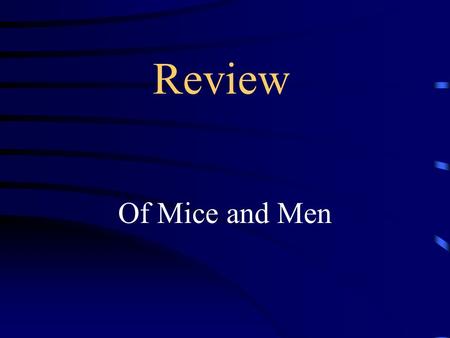 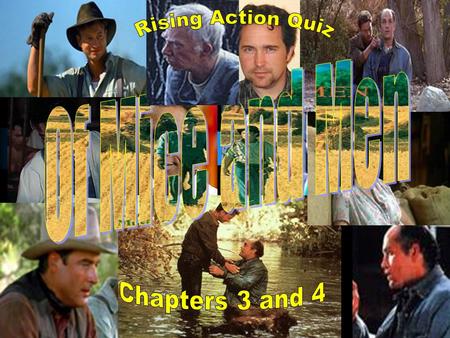