Presentation on theme: "They won the French and Indian war, but parliament still had to pay for it."— Presentation transcript:

1 They won the French and Indian war, but parliament still had to pay for it.

2 Taxing the Colonists George Greenville asked Parliament to tax the colonists. They had to keep an army in the colonies to protect against attack.

3 The Sugar Act Put taxes on Molasses and Sugar imported by the colonists.

4 Cracking down on Smuggling British officials tried harder to arrest smugglers. Traders had to make a list of what was on their ships and had to be approved before they could leaver the port.

5 Stop and Search British ships stopped other ships to search for smuggling goods.

6 Changing the Legal System Parliament gave greater powers to the Vice-Admiralty courts. They had no juries, and the judges treated suspected smugglers as guilty until proven innocent. Regular British Courts it was the opposite.

7 Taxation without Representation No one in Britain had asked the colonists if they wanted to be taxed. The colonists had no direct representatives in Parliament.

8 Committees of Correspondence Samuel Adams helped found and spread the ideas of no taxation to the other colonies. A popular method of protest BOYCOTT BOYCOTT This is where people refused to buy British goods.

9 Stamp Act This act required colonists to pay for an official stamp, or seal when they bought paper items. Had to be paid for licenses, newspapers, pamphlets, and even playing cards.

10 Protest against the TAX Sons of Liberty: a secret society that sometimes used violence to frighten tax collectors. Many courts shut down because the colonists refused to buy the stamps required for legal documents. Businesses refused to buy stamps.

11 Repealing the Stamp Act In Boston they called on delegates from 9 colonies to fight against the act saying it was a violation of their rights and liberties. Parliament in Britain was mad so they passed the Declaratory Act …..this stated that parliament had the power to make laws for the colonies “IN ALL CASES”

12 Townshend Acts Placed taxes on glass, lead, paint, paper, tea. Samuel Adams wrote a letter saying that the laws violated the legal rights of the colonists. Tax collectors seized the ship Liberty on suspicion of smuggling. This angered the ship owners and the SON”S OF LIBERTY.

14 Boston Massacre This is what the shooting was known as. Samuel Adams and other protesters spread the word using propaganda. Propaganda is a story only giving one side of the argument, against the British.

16 Repealing the Townshend Act They took the taxes away from everything except tea. Most of the Tea was being smuggled without paying taxes. The British East India Company offered tea at a lower price than the smugglers could get it, and they still paid taxes on it.

17 The tea Act Allowed the British East India Company to sell tea directly to the colonists. December 16,1773 colonists disguised as Indians sneaked onto the 3 filled tea ships and dumped over 340 chests of Tea into the Harbor. This event is known as the BOSTON TEA PARTY>

18 Intolerable Acts Boston Harbor closed until ruined tea was paid for. Royal officials accused of crime were sent to Britain for trial. This let them see a friendlier judge. Colonists had to house British Soldiers General Thomas Gage became the new Governor of Massachusetts All of this angered the colonists towards the British.

Download ppt "They won the French and Indian war, but parliament still had to pay for it." 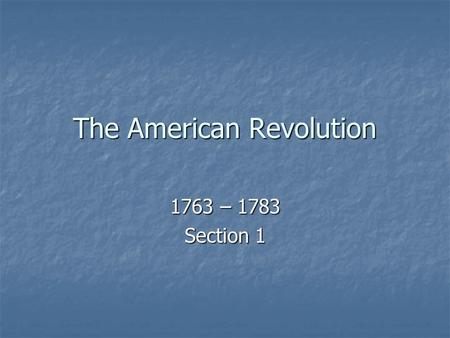 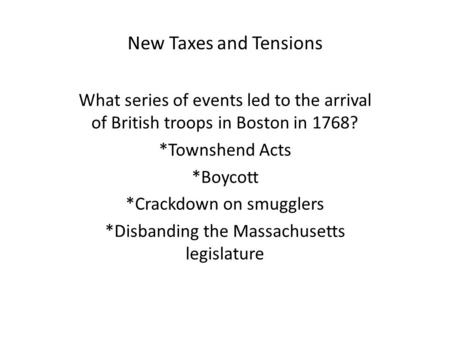