1 THE SOLAR SYSTEM by Lauren Krall
The solar system has eight planets and one dwarf planet. Our star is the sun.

2 THE SUN The sun is our star.
The sun is in the center of our solar system.

3 MERCURY The maximum temperature on Mercury is 801 degrees Fahrenheit.
Mercury is the 1st planet from the sun.

4 VENUS The atmosphere of Venus is mainly made up of carbon dioxide.
Venus is slightly smaller than Earth.

5 EARTH Earth is the third planet from the sun. All life is on Earth.

6 MARS Mars is the only planet whose surface can be seen in detail from the Earth. Mars is the 4th planet from the sun.

9 SATURN Saturn is the 2nd largest planet in our Solar System.
Saturn has the thickest rings.

10 URANUS Some nights on Uranus last 40 Earth years.
Uranus is the 7th planet from the sun.

11 NEPTUNE Neptune is the 8th and final REAL planet from the sun.
Neptune is named after a Roman God.

12 PLUTO Pluto is the only dwarf planet it is no longer considered a planet. The color of Pluto is a reddish-brown.

13 COMETS Some comets, like Halley’s comet become well known because their orbits bring them closer to Earth. The few percent of comets are made of some kind of ice.

14 STARS A star is huge ball of superheated gas. The sun is a star.

15 GALAXY A Galaxy is a large system of stars, gas, dust.
Our galaxy is the Milky Way. 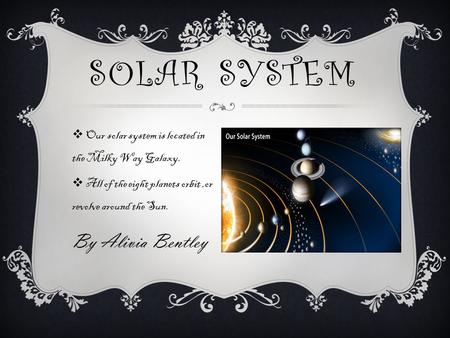