3 THE DIRECTION OF THE FLOWING ELECTRIC CURRENT
- +

4 THE MEASUREMENT OF CURRENT
An electric current (I) can be stated as the rate of the flowing electric charge (Q) through a certain cross-section of a conductor The instrument used to measure current is ammeter Formula: I = current, Q = charge, and t = time

5 MEASURING CURRENT Electric current is measured in amps (A) using an ammeter connected in series in the circuit. A

6 Ampere: The Unit of Current
One ampere is the amount of current that exists when a number of electrons having a total charge of one coulomb pass a given cross-sectional area in one second

11 THE E.M.F OF A CELL The e.m.f of a cell is defined as the energy converted from non- electrical forms to electrical form when one coulomb of positive charge passes through the cell

12 BATTERY A battery is a voltage source that converts chemical energy into electrical energy The way cells are connected, and the type of cells, determines the voltage and capacity of a battery

13 THE ARRANGEMENT OF BATTERIES

14 THE FORMULA OF E.M.F The formula used to calculate e.m.f is: E = e.m.f
W = converted energy Q = positive charge Therefore, the SI unit of e.m.f is joule/coulomb, which is volt (V)

15 POTENTIAL DIFFERENCE (p.d)
The potential difference between two points can be defined as the energy converted from electrical energy to other forms when one coulomb of positive charge passes through the cell

16 THE FORMULA OF P.D The formula used to calculate p.d is: V = p.d
W = converted energy Q = positive charge Therefore, the SI unit of p.d is joule/coulomb, which is volt (V)

19 MEASURING VOLTAGE The ‘electrical push’ which the cell gives to the current is called the voltage. It is measured in volts (V) on a voltmeter V

20 MEASURING VOLTAGE Different cells produce different voltages. The bigger the voltage supplied by the cell, the bigger the current. Unlike an ammeter a voltmeter is connected across the components Scientist usually use the term Potential Difference (pd) when they talk about voltage.

22 Measuring Voltage Voltage:
Probes connect to either side of the resistor

23 A circuit is the path that is made for an electric current.

26 If the path is broken, no current flows through the circuit.

27 Parallel Circuits A type of circuit that has multiple paths for current is called a parallel circuit. Different paths may contain different current flow. This is also based on Ohms Law.

28 If one part of the path is removed, the current continues to flow through the other paths of the circuit.

29 By Analogy: Series Vs Parallel

32 THE FORMULA OF RESISTANCE
The formula used to calculate resistance is: V = p.d (V) I = electric current (A) R = resistance (Ω) Therefore, the SI unit of resistance is volt/ampere which is ohm (Ω)

33 RESISTOR It is used to provide a certain value of resistance in a circuit Its function is to control the size of the current that flows in a circuit or divide voltage, and in some cases, generate heat There are 2 types of resistor: Fixed Resistor Variable Resistor (rheostat)

37 Color-code Bands on a Resistor

43 Ohmic Resistors Metals obey Ohm’s Law linearly so long as their temperature is held constant Their resistance values do not fluctuate with temperature i.e. the resistance for each resistor is a constant Most ohmic resistors will behave non-linearly outside of a given range of temperature, pressure, etc.

44 Voltage and Current Relationship for Linear Resistors
Voltage and current are linear when resistance is held constant.

48 Series Circuit Current is constant Why?
Only one path for the current to take

49 Parallel Circuit Voltage is constant Why?
There are 3 closed loops in the circuit

54 THE RELATION BETWEEN RESISTANCE AND RESISTIVITY
The resistance (R) of a conductor depends on: Its length Its cross-sectional area The material used in resistance Its temperature

56 THE FORMULA OF RESISTANCE
Combining the two equations, we find: is resistivity and its SI unit is Ω m

59 Energy Loss in Power Lines
Wires have some resistance To transport energy from Point A to Point B, we connect wires Each wire has resistance Energy Loss in one second is I2R Make I small to minimize Transformers convert AC Voltages 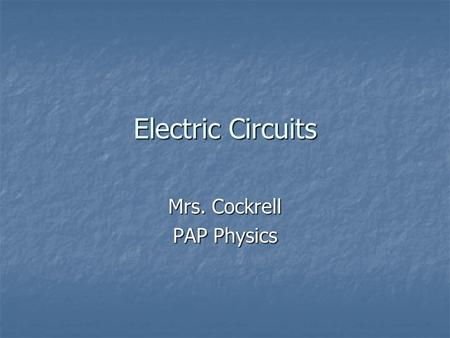 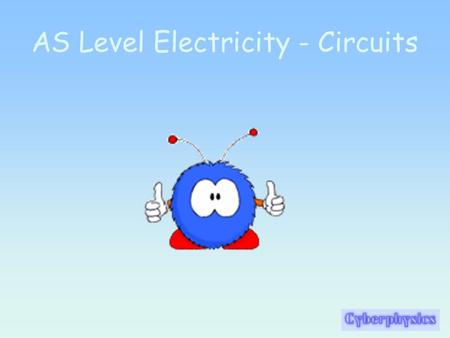 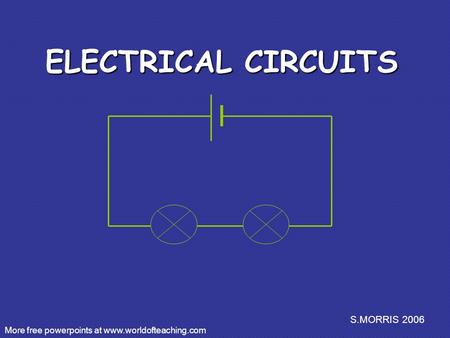 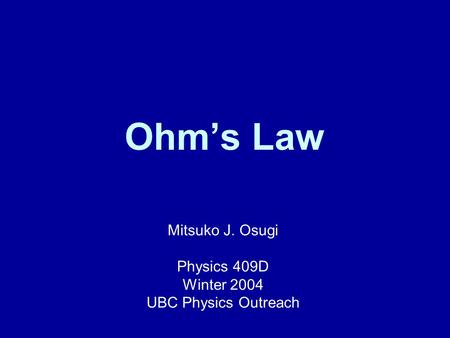 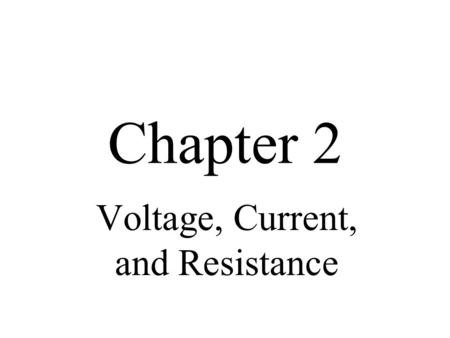 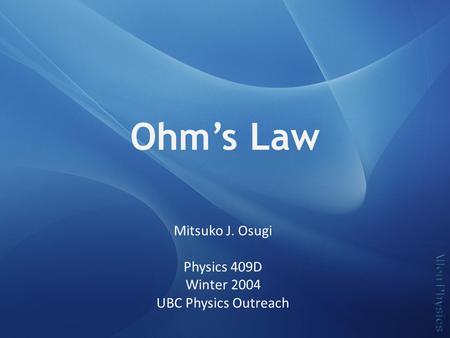 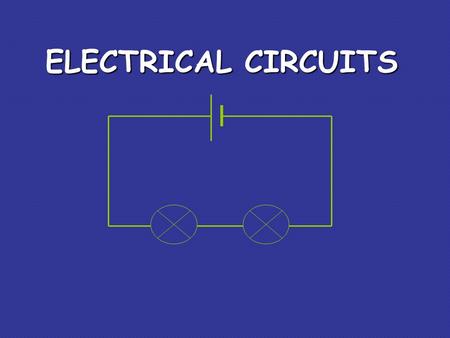 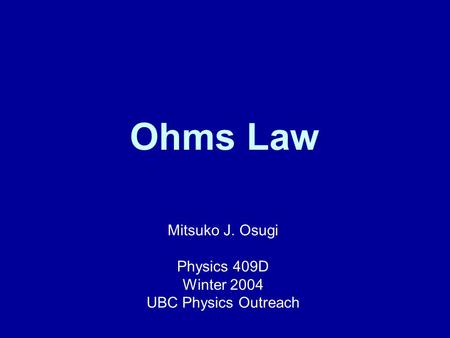 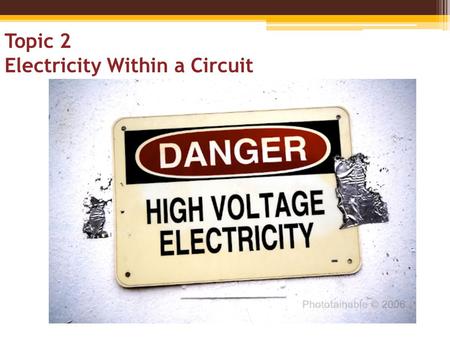 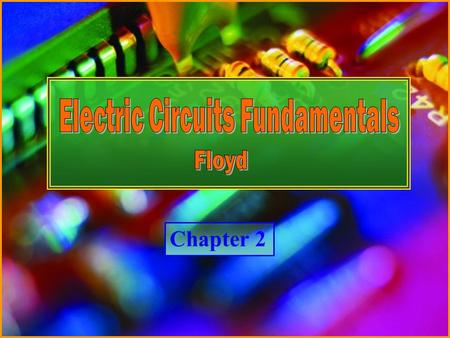 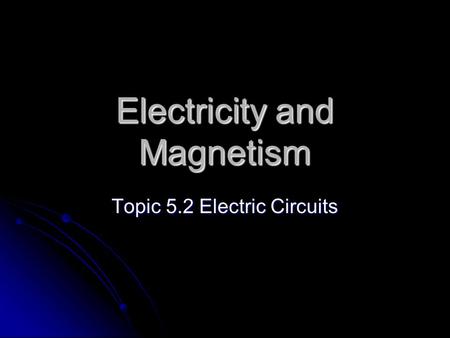 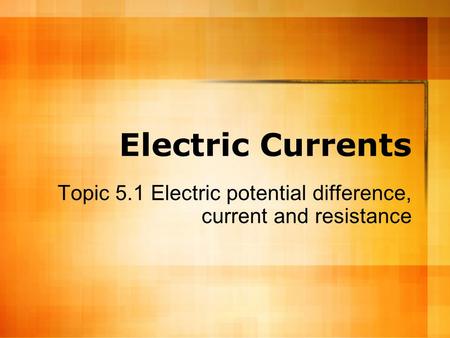 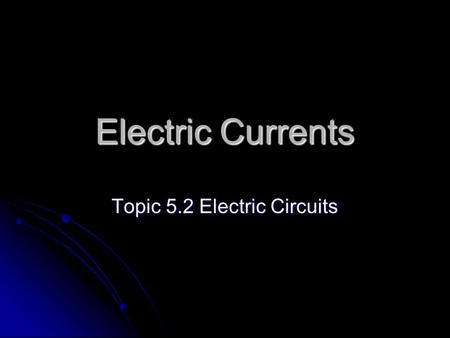 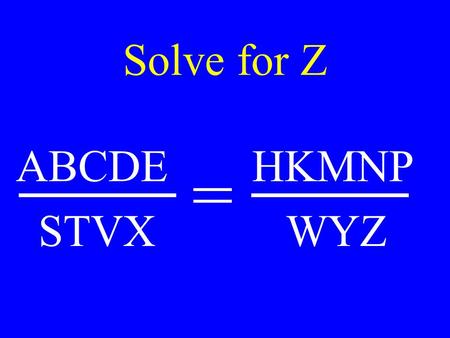