2 Introduction to GM Foods
Definition of GM Foods; Meat and edible plants modified through genetic engineering GM foods were first put on the market in 1996 Humans have genetically modified animal and plants since the beginning of civilization. Modern techniques can transfer genetic material from one organism to another to directly create totally different variants. These foods are often discussed due to the uncertainty of their long-term effects on humans and food chains. Typically, genetically modified foods are soybean, corn, canola, and cotton seed oil. Animal products have also been developed, although as of July 2010 none are currently on the market By Luka Grepl-Malmgren 7BB

3 Advantages with GM Foods
Saves the use of toxic chemicals. GM crops can be made resistant to pests, so pesticides do not need to be sprayed on them. This is also better on the environment! Prevents wasted crops. If pests cannot eat the crops, nothing goes to waste. It could potentially solve hunger. Many people agree that there is not enough food in the world to feed everybody. As genetically modified foods increase the yields of crops, more food is produced by farmers. We can begin to grow foods in different conditions. For instance, strawberries can be genetically engineered to grow in frosts. Other foods that grow in cold climates could be engineered to grow in hot climates (such as Africa where much of the continent does not have enough food). Some foods can be genetically modifies to contain higher amounts of important vitamins and minerals. Lack of Vitamin A cause blindness. In Africa, 500,000 go blind each year. If rice can be modified to contain more vitamin A, the amount of people going blind will decrease. By Luka Grepl-Malmgren 7BB

4 Disadvantages of GM Foods
. The change in a plant may cause it to be toxic to an insect or animal that uses it as its main food source. Due to the widespread use of insect resistant genes in crops the insects may become resistant to the genetic modifications. Genetic modification could cause allergies in humans. People may find that they are now allergic to other food products because they contain a gene from the allergen they have. One example is the use of a Brazilian nut gene in corn. The mix of substances may interact badly with one another in food so they might get poisonous. A major economical concern is that the control of world food sources may be limited to large companies because they own the GM seeds. Genetic modification can also make it difficult to know what you are eating, as a plant could contain animals products via genetic engineering. This could cause issues for those with dietary restrictions and religious commitments. By Luka Grepl-Malmgren 7BB

5 By Luka Grepl-Malmgren 7BB
Public Opinion Today, just four countries account for 99% of the world's commercially grown GM crops. Many others have been hesitating over whether to allow GM Foods or not In general people are scared of the GM Foods since the long term effects are difficult to determine and it is difficult to understand the science behind it. However many worry more about the price than if it is GM Food or not. The GM Foods Industry is trying to educate and inform governments and people in order to make them less afraid. Some governments such as the US are finding the benefits greater than the disadvantages while others like in the EU does hardly allow any use of GM Foods at all. It seems that people are less negative in countries where the governments are positive and where there is a trust in their ability to protect their citizens. By Luka Grepl-Malmgren 7BB 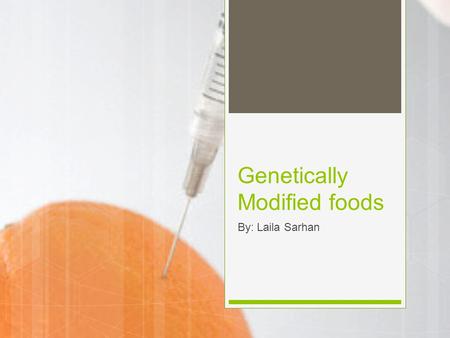 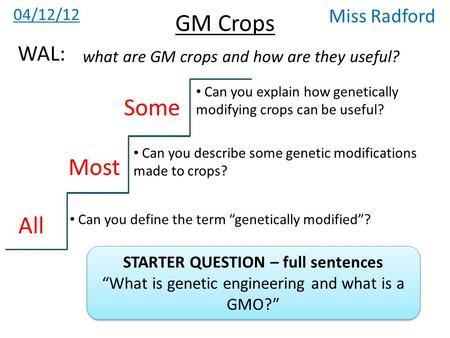 GM Crops 04/12/12 Miss Radford what are GM crops and how are they useful? WAL: All Most Some Can you define the term “genetically modified”? Can you describe.