3 Introduction G.M. stands for Genetically Modified
Derived from or produced by GM organisms DNA of GM organisms have been altered through genetic engineering Does not include forms of genetic modification such as selective breeding and mutation breeding Modified by taking a gene from another cell type and adapting it into the GM organism DNA Also known as the recombinant method

4 Examples Most GM foods on the market are plant products that have been genetically modified. Examples include: Soy Canola Tomato Rice Potato Cotton

6 Benefits As stated in the characteristics above, these alterations make GM foods a good choice in the market. GM crops can be modified to be resistant to pests as well as pesticides and herbicides. It means that it is healthier than normal foods as they are either pesticide-free or pesticide-resistant, which means that we do not have to eat pesticide. Overall better for our health, just like organic plants.

7 Benefits GM crops can also be made to resist disease and other drastic environmental conditions. This means that there is a high probability that these crops can survive wide-spread diseases as well as droughts or floods. This increases gross output of crops, which leads to our next point.

8 Benefits GM crops can also be modified to yield a higher gross output amount than normal crops. This leads to a higher income when selling crops for commercial farmers. Also means that subsistence farmers have more to eat and more to store for rainy days.

9 Benefits GM foods can be modified to have a longer shelf life such that it can be stored for longer periods of time without going bad. This is good for the marketability of the crops as they can be kept for a long time before being sold or consumed.

10 Benefits GM crops are mostly altered for extra nutritional value for more health benefits. This includes modifying crops so that they produce an extra amount of healthy substances such as Vitamins as well as things like Iron and Antioxidants.

11 Benefits Certain GM crops such as bananas can be modified such that they serve as vaccines to certain diseases. These vaccines can be ingested along with the banana, making it convenient and less painful than injections.

12 Controversies Safety is a major issue in this controversy.
Might pose health risks to consumers though none of such cases have been documented. Scientists and pressure groups such as Greenpeace and WWF insist that there is no guarantee.

13 Controversies Effects on ecosystems
Reducing the numbers of pest insects in farmland and impacting biodiversity, or by decreasing the use of insecticides. Attempts to measure effects by farm-scale trials of GM crops, although they have been controversial. The risk and effects of horizontal gene transfer have also been cited as concerns, with the possibility that genes might spread from modified crops to wild relatives.

14 Controversies: Case Study
Pusztai potato data Rats fed potatoes genetically modified to contain lectin, a natural insecticide in snowdrop plants, had stunted growth and immune system damage. Bioequivalence study of a corn cultivar Rats were being fed on GM corn: Shows differences in kidney size and blood composition found in this study However, it was argued that the differences were not biologically meaningly. 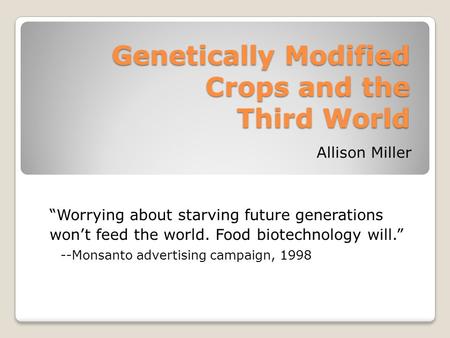 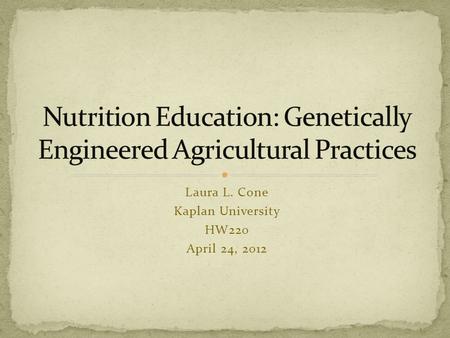