3 Architecture of BP Nets
Multi-layer, feed-forward networks have the following characteristics: -They must have at least one hidden layer Hidden units must be non-linear units (usually with sigmoid activation functions) Fully connected between units in two consecutive layers, but no connection between units within one layer. For a net with only one hidden layer, each hidden unit receives input from all input units and sends output to all output units Number of output units need not equal number of input units Number of hidden units per layer can be more or less than input or output units

5 Introduction to Backpropagation
In 1969 a method for learning in multi-layer network, Backpropagation (or generalized delta rule) , was invented by Bryson and Ho. It is best-known example of a training algorithm. Uses training data to adjust weights and thresholds of neurons so as to minimize the networks errors of prediction. Slower than gradient descent . Easiest algorithm to understand Backpropagation works by applying the gradient descent rule to a feedforward network.

7 Training a BackPropagation Net
Feedforward training of input patterns each input node receives a signal, which is broadcast to all of the hidden units each hidden unit computes its activation which is broadcast to all output nodes Back propagation of errors each output node compares its activation with the desired output based on these differences, the error is propagated back to all previous nodes Delta Rule Adjustment of weights weights of all links computed simultaneously based on the errors that were propagated back

12 Training a Back Prop Net: Adjusting the Weights
Each output unit updates its weights and bias 6. Each hidden unit updates its weights and bias Each training cycle is called an epoch. The weights are updated in each cycle It is not analytically possible to determine where the global minimum is. Eventually the algorithm stops in a low point, which may just be a local minimum.

18 Propagation of signals through the output layer.
In the next algorithm step the output signal of the network y is compared with the desired output value (the target), which is found in training data set. The difference is called error signal d of output layer neuron.

19 It is impossible to compute error signal for internal neurons directly, because output values of these neurons are unknown. For many years the effective method for training multilayer networks has been unknown. Only in the middle eighties the backpropagation algorithm has been worked out. The idea is to propagate error signal d (computed in single teaching step) back to all neurons, which output signals were input for discussed neuron.

20 The weights' coefficients wmn used to propagate errors back are equal to this used during computing output value. Only the direction of data flow is changed (signals are propagated from output to inputs one after the other). This technique is used for all network layers. If propagated errors came from few neurons they are added. The illustration is below:

21 When the error signal for each neuron is computed, the weights coefficients of each neuron input node may be modified. In formulas below df(e)/de represents derivative of neuron activation function (which weights are modified).

25 Training Algorithm 1 Step 0: Initialize the weights to small random values Step 1: Feed the training sample through the network and determine the final output Step 2: Compute the error for each output unit, for unit k it is: Actual output dk = (tk – yk)f’(y_ink) Required output Derivative of f

30 Example The XOR function could not be solved by a single layer perceptron network The function is: X Y F

38 In the perceptron/single layer nets, we used gradient descent on the error function to find the correct weights: D wji = (tj - yj) xi We see that errors/updates are local to the node ie the change in the weight from node i to output j (wji) is controlled by the input that travels along the connection and the error signal from output j x1 (tj - yj) x1 x2 ? But with more layers how are the weights for the first 2 layers found when the error is computed for layer 3 only? There is no direct error signal for the first layers!!!!!

39 Credit assignment problem
Problem of assigning ‘credit’ or ‘blame’ to individual elements involved in forming overall response of a learning system (hidden units) In neural networks, problem relates to deciding which weights should be altered, by how much and in which direction. Analogous to deciding how much a weight in the early layer contributes to the output and thus the error We therefore want to find out how weight wij affects the error ie we want:

45 Backward Pass Will use a sum of squares error measure. For each training pattern we have: where dk is the target value for dimension k. We want to know how to modify weights in order to decrease E. Use gradient descent ie both for hidden units and output units

47 Term B first: Term A Let (error terms). Can evaluate these by chain rule:

48 For output units we therefore have:

49 For hidden units must use the chain rule: 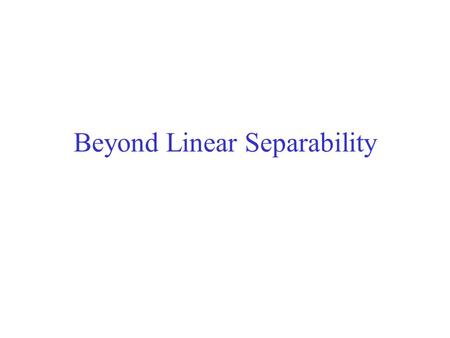 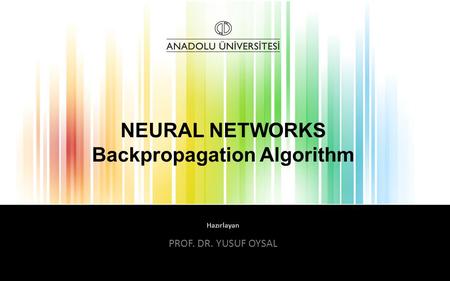 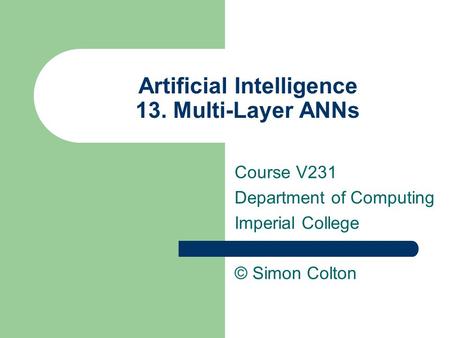 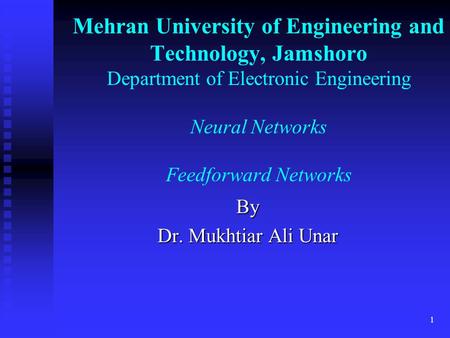 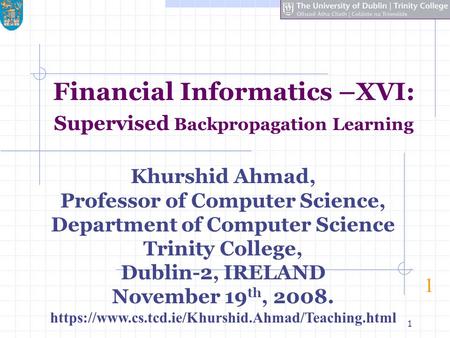 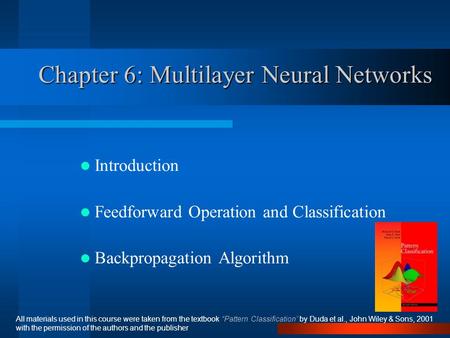