5 Question Using one illustrative example, explain how the High Court interpretation of the Commonwealth Constitution occurs and the impact of this interpretation on the division of powers. 5 marks.

6 Answer See previous answer for the first part of the question. Then… in the Tasmanian Dams Case the Tasmanian Parliament questioned the powers of the Commonwealth parliament to make laws to overrule the damming of the Franklin River, seeking that the High Court declare the Commonwealth legislation to be ultra vires. The Tasmanian Government wanted to dam the Franklin River. However, the Federal Parliament passes the World Heritage Properties Conservation Act in order to prevent this from occuring and uphold the UNESCO Convention obligations. When Tasmania challenged the validity of the federal legislation, the High Court decided that the act was valid as it was made under the ‘external affairs’ power of the Constitution. The impact was that the High Court extended the meaning of the term ‘external affairs’ (s. 51 xxix) to include law making necessary to uphold obligations under an international treaty signed by Federal Government. This extended the law making powers of the Federal Parliament which could pass legislation in a range of areas, include residual power.

7 Explain the facts of the two cases that we have studied and explain the impact of the High Court decision.

8 Answer: Brislan Case Name of case Summary of facts
Section of Constitution to be interpreted High Court decision Impact of High Court decision R v. Brislan; ex parte Williams (Brislan’s Case) Mrs Brislan was charged under the Wireless Telegraphy Act 1905 (Cth) with having a wireless without holding a license for it. She challenged the validity of the act, claiming that the Commonwealth did not have the power to make laws about wireless. s. 51(v) Postal, telegraphic and other like services ‘Other like services’ included wirelesses. Therefore Wireless Telegraphy Act was valid. Extended the meaning of s. 51 (v) thereby giving more legislative powers to the Commonwealth parliament and bring the section up to date with current needs. Any state law can’t be inconsistent with Cth law otherwise s. 109 would apply.

9 Answer: Franklin Dam Case
Name of case Summary of facts Section High Court decision Impact of High Court decision Tasmanian Dam Case The Comm Parliament passed the World Heritage Properties Conservation Act 1983 to prevent clearing and building of a dam in Tasmania. Tasmania claimed the Comm had no jurisdiction to pass a law, however Commonwealth argued that they could make laws on areas of national concern s. 51 (xxix) – external affairs High Court decided that external affairs power gave the Comm parliament power to make laws to fulfill Australia’s obligations under international treaties. Therefore the act was valid and the Comm stopped the Tas gov from constructing the dam Extended the meaning of the external affairs power to include law making necessary to uphold obligations under international treaty. Greatly expanded law making power of Comm parliament as they can now legislate in an area that was a residual power.

10 Question Has the High Court has a greater impact on changing the division of powers than referendums?

11 Question In a speech to lawyers in early 2001, High Court Chief Justice Murray Gleeson said that ‘the failure of so many referendums meant that there was a real risk that the public might expect the High Court instead to change the Constitution’. Analyse the effectiveness of both referendum and High Court interpretation of the Constitution as a means of changing the division of law making powers between the Commonwealth and the State Parliaments. 8 marks.

12 Guidance for answer In order to analyse the effectiveness of referendums as a means of changing the division of power, you should refer to the low success rate of referendums (8 out of 44 have been successful) and the reason why this is so low (lack of bipartisan support, double majority provision, timing etc). Of eight successful referendums, most have had no effect on the DIVISION OF POWES and that three have resulted in an increase in power of Comm parliament. Relate these back to the quote in the question. With regard to the effectiveness of High Court interpretation in altering division of powers, use examples to show how this has occurred (Brislan or Tas Dam cases). It is important to state that the High Court interpretation of the Constitution has had far more impact on changing division of powers that referendum. Again, refer back to the quote in the question that supports your conclusion on the effectiveness. 4 marks for analysis of referendum (need to say 8/44 have been successful) 4 marks for analysis of High Court interpretation (need to use example – Brislan or Tasmanian Dam case) Remember to refer back to quote in discussion 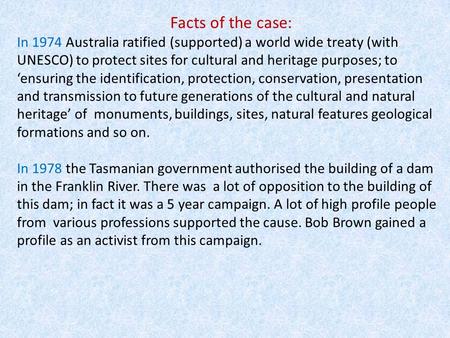 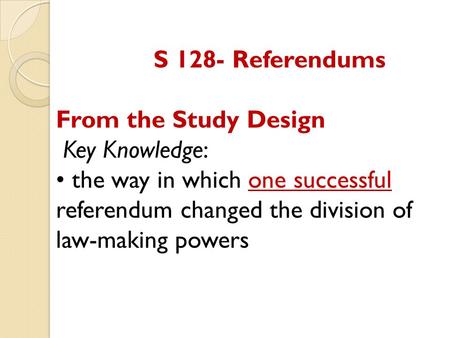 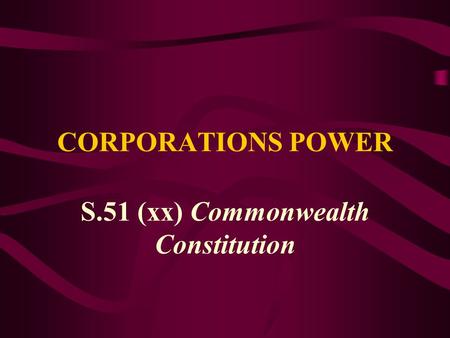 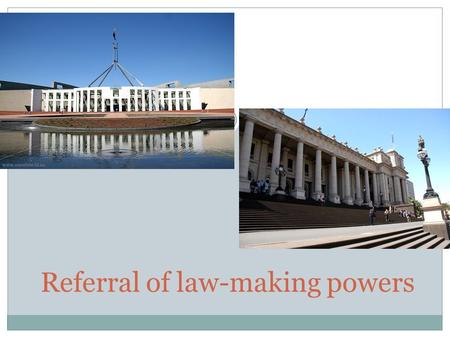 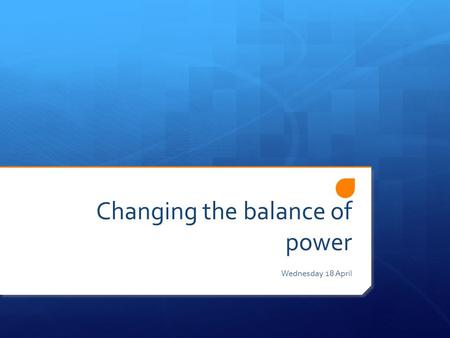 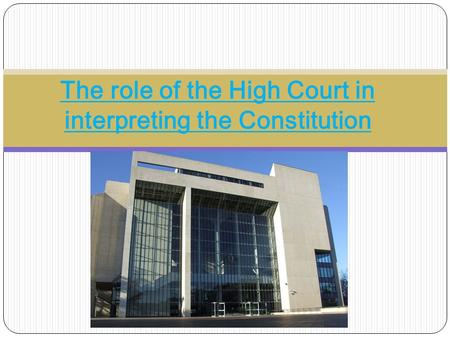 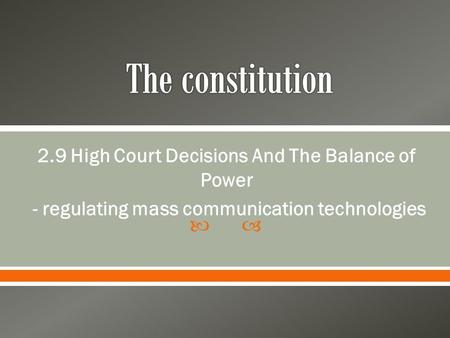 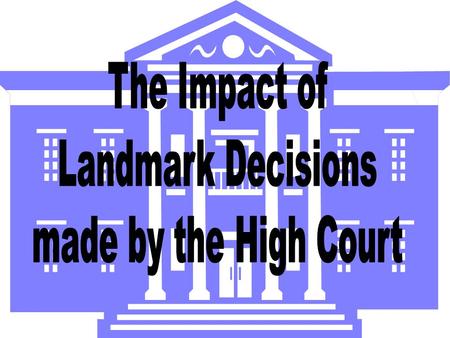 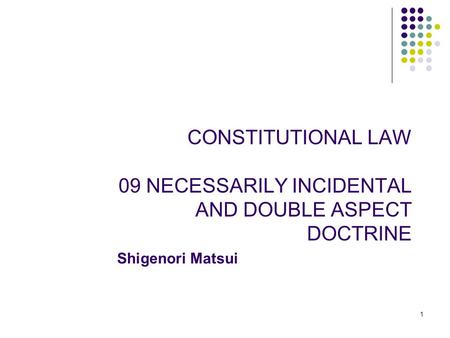 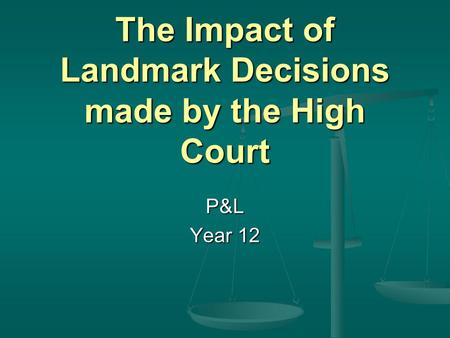