1 African Americans in the Progressive Era
Discrimination and Racism

2 Segregation (2 types) De Jure Segregation De Facto Segregation
Segregation enforced by laws enforced in the South under Jim Crow Laws Becomes a reality for the nation with Plessy vs. Ferguson Segregation based on unwritten laws like custom and tradition

3 Plessy vs. Ferguson, 1896 Case goes to the US Supreme Court
Homer Plessy was 1/8 African American and bought a white train ticket in Jim Crow segregated Louisiana…denied seat Case goes to the US Supreme Court Court’s decision uphold and strengthen Jim Crow segregation “Separate but equal” is fair Is separate ever equal?...Justice Harlan did not think so, only Justice that went against the 8-1 decision (Harlan Dissent) Sets up de jure segregation

5 African American Reformers
Booker T. Washington VS. W.E.B. Du Bois Urged for AA to be patient while waiting for equality (“Atlanta Compromise Speech”) Eventually AA would gain white respect “Cast down your bucket” with the people who share the same aspirations Be economically independent Become craftsmen and learn a skill Setup Tuskegee Institute for vocational education Urged AA to demand their rights immediately or else fall victim to permanent racism Promoted an academic education not skill/trade based Called Washington’s speech the Atlanta Compromise since he “gave in”

6 Other Reformers Ida B. Wells Barnett
Wrote about the horrors of lynching (execution, usually by hanging, without a trial) in the South Helped form the NAACP

10 Disenfranchisement Taking away the right of AA to vote because there were loopholes in the 15th Amendment 4 strategies Through intimidation, KKK Through laws: Grandfather Clause: AA could vote if his ancestors had voted in 1866…15th Amendment not passed until 1870 Poll Tax: AA must pay a tax to vote, AA can’t afford it Literacy Tests: AA had been denied an education so they can’t pass the test 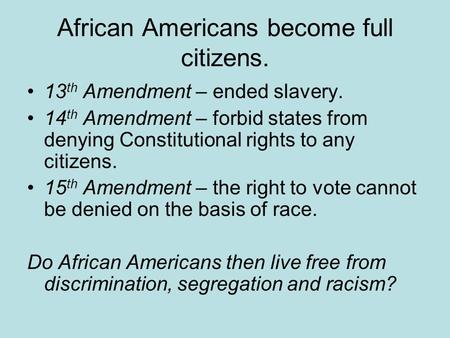 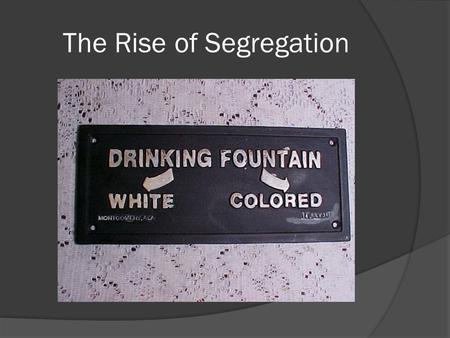