4 Global Outlook: Worldwide, AIDS Is the Leading Cause of Death for Ages 15–49
How AIDS can affect the age structure of a population. This figure shows the projected age structure of Botswana’s population in 2020 with and without AIDS

5 17-1 Risks Are Usually Expressed as Probabilities
Risk is the probability of suffering harm from a hazard that cause injury, disease, death, economic loss, or damage Probability (estimate of the likelihood ) and possibility (could happen) Risk Assessment Scientific process of using statistical methods to estimate how much harm a particular hazard can cause to human health Risk Management Involves deciding whether or how to reduce a particular risk

8 17-2 Some Diseases Can Spread from One Person to Another
Nontransmissible disease Cardiovascular disease, cancer, asthma, diabetes Transmissible disease (contagious or communicable disease) Caused by a pathogen (bacteria, virus or parasite) that invades the body transmitted from one person to the next Flu, HIV, malaria, measles

9 Some Diseases Can Spread from One Person to Another
Since 1950, death from infectious diseases have declined due to Better health care Antibiotics Vaccines

13 Case Study: The Growing Global Threat from Tuberculosis
Effects ~9.2 million people per year Kills 1.7 million a year (84% in developing countries Why is tuberculosis on the rise? Not enough screening and control programs Genetic resistance to a majority of effective antibiotics Person-to-person contact has increased AIDS individuals are very susceptible to TB

23 17-3 Some Chemicals Can Cause Cancers, Mutations, and Birth Defects
Toxic chemicals Carcinogens- cause cancer Mutagens- change in DNA Teratogens- causes harm or birth defects to a fetus

30 17-4 Many Factors Determine the Harmful Health Effects of a Chemical
Toxicology Study of harmful effects of chemicals on humans Toxicity measures how harmful a substance is in causing injury, illness, or death to a living organism dependent on Dose Age Genetic makeup Multiple chemical sensitivity (MCS) Solubility and persistence of the chemical Water soluble (move throughout environment) Oil or fat soluble (accumulate in tissue) Biomagnification

31 Bioaccumulation and Biomagnifications
DDT in fish-eating birds (ospreys) 25 ppm DDT in large fish (needle fish) 2 ppm DDT in small fish (minnows) 0.5 ppm DDT in zooplankton 0.04 ppm Bioaccumulation and biomagnification. DTT is a fat-soluble chemical that can accumulate in the fatty tissues of animals. In food chains or webs, the accumulated DDT can be biologically magnified in the bodies of animals at each higher tropic level. This diagram shows that the concentration of DDT in the fatty tissues of organisms was biomagnified about 10 million times in this food chain in an estuary near long Island Sound in New York. If each phytoplankton organism takes up from the water and retains one unit of DDT, a small fish eating thousands of zooplankton ( which feed on the phytoplankton) will store thousands of units of DDT in its fatty tissue. Then each larger fish that eats 10 of the smaller fish will ingest and store tens of thousands of units, and each bird (or human) eats several large fish will ingest hundreds of thousands of units. Black dots represent DDT, and arrows show small loses of DDT through respiration and excretion. DDT in water ppm, Or 3 ppt Bioaccumulation and Biomagnifications 3/25/2017

40 Some Potentially Harmful Chemicals Found in Most Homes

41 Are Trace Levels of Toxic Chemicals Harmful?
We do not know

42 Pollution Prevention and the Precautionary Principle
Those introducing a new chemical or new technology would have to follow new strategies A new product is considered harmful until it can be proved to be safe Existing chemicals and technologies that appear to cause significant harm must be removed 2000: global treaty to ban or phase out the dirty dozen (POPs)

46 Cause of death Annual deaths Poverty/malnutrition/ disease cycle
11 million (150) Tobacco 5.4 million (74) Pneumonia and flu 3.2 million (44) Air pollution 3 million (41) HIV/AIDS 2.1 million (29) Diarrhea 1.9 million (26) Tuberculosis 1.7 million (23) Automobile accidents 1.2 million (16) Figure 17.18 Global outlook: number of deaths per year in the world from various causes (Concept 17-5). Numbers in parentheses give these deaths in terms of the number of fully loaded 200-passenger jet airplanes crashing every day of the year with no survivors. Because of sensational media coverage, most people are misinformed about the largest annual causes of death. Question: Which three of these items are most likely to shorten your life span? (Data from World Health Organization) Work-related injury and disease 1.1 million (15) Malaria 1 million (14) Hepatitis B 1 million (14) Measles 800,000 (11) Fig , p. 461 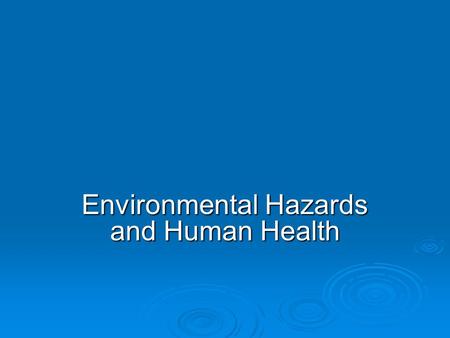 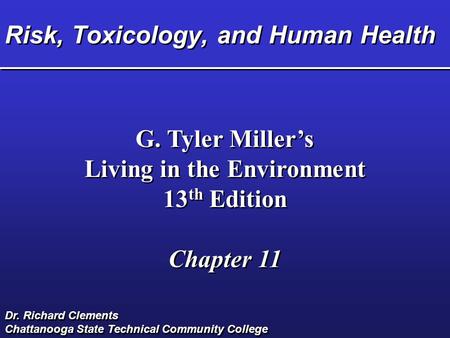 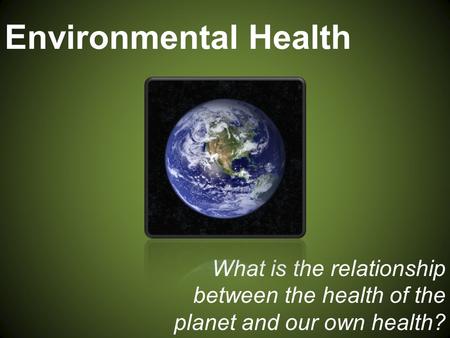 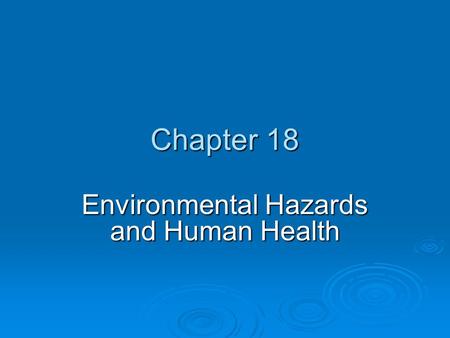 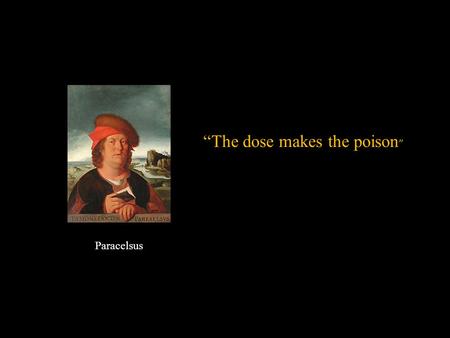 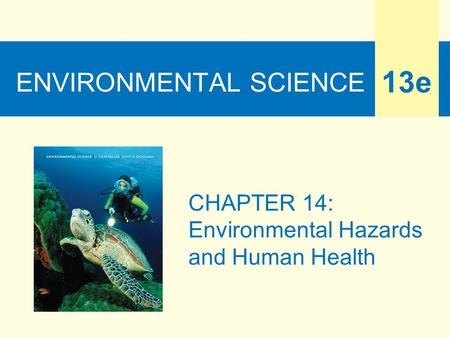 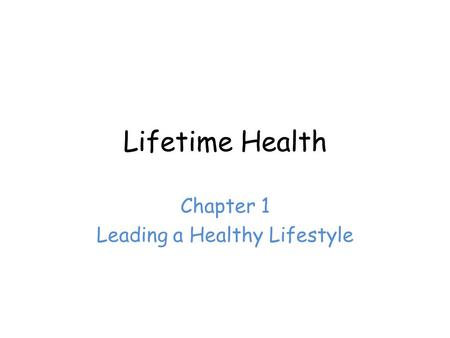 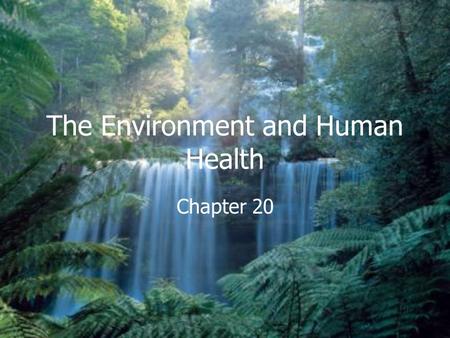 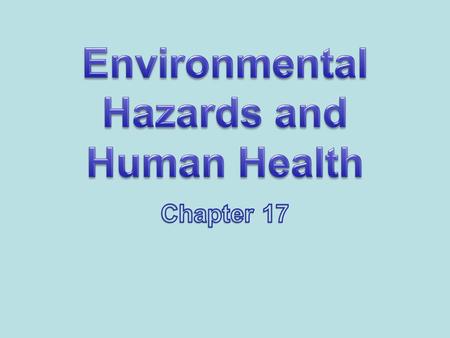 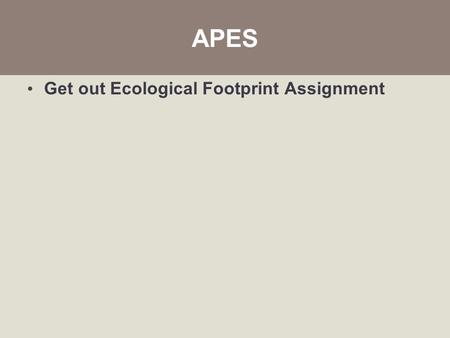 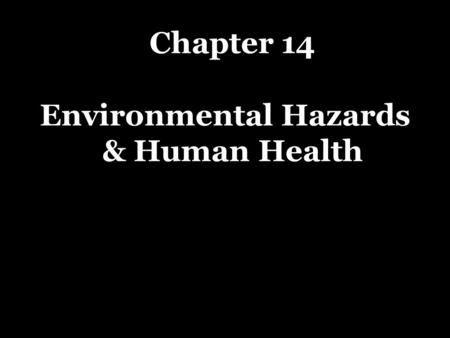 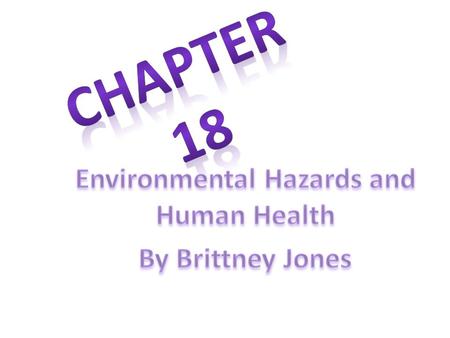 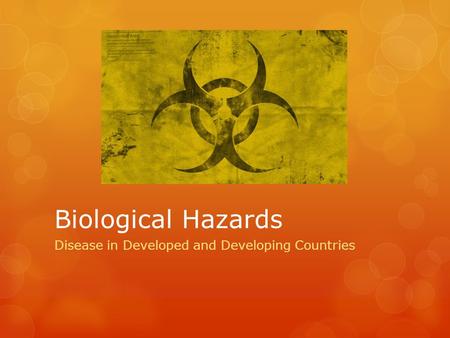 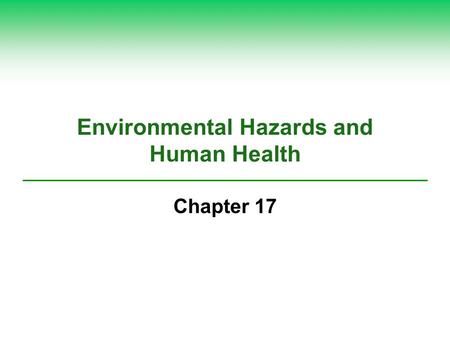 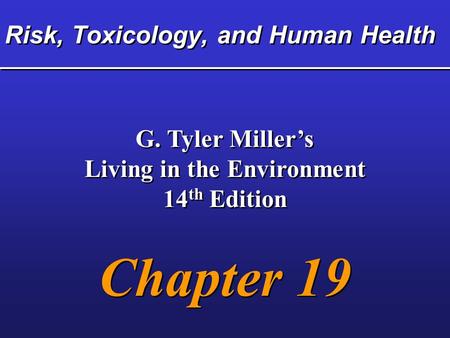 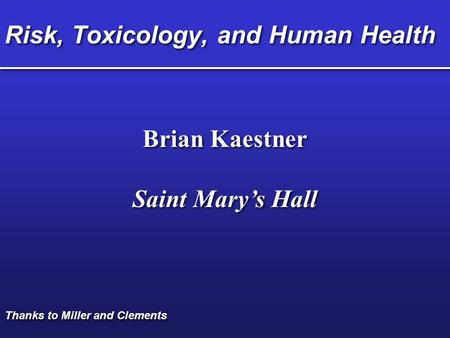 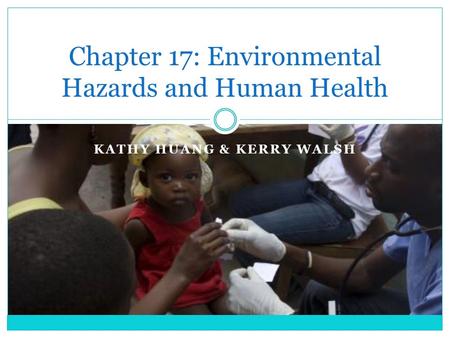