5 For two hundred years, the White House has stood as a symbol of the Presidency, the United States government, and the American people. Its history, and the history of the nations capital, began when President George Washington signed an Act of Congress in December of 1790 declaring that the federal government would reside in a district "not exceeding ten miles square…on the river Potomac." President Washington, together with city planner Pierre LEnfant, chose the site for the new residence, which is now 1600 Pennsylvania Avenue. As preparations began for the new federal city, a competition was held to find a builder of the "Presidents House." Nine proposals were submitted, and Irish-born architect James Hoban won a gold medal for his practical and handsome design.Construction began when the first cornerstone was laid in October of 1792. Although President Washington oversaw the construction of the house, he never lived in it. It was not until 1800, when the White House was nearly completed, that its first residents, President John Adams and his wife, Abigail, moved in. Since that time, each President has made his own changes and additions. The White House is, after all, the Presidents private home. It is also the only private residence of a head of state that is open to the public, free of charge.The White House has a unique and fascinating history. It survived a fire at the hands of the British in 1814 (during the war of 1812) and another fire in the West Wing in 1929, while Herbert Hoover was President. Throughout much of Harry S. Trumans presidency, the interior of the house, with the exception of the third floor, was completely gutted and renovated while the Trumans lived at Blair House, right across Pennsylvania Avenue. Nonetheless, the exterior stone walls are those first put in place when the White House was constructed two centuries ago.Presidents can express their individual style in how they decorate some parts of the house and in how they receive the public during their stay. Thomas Jefferson held the first Inaugural open house in 1805. Many of those who attended the swearing-in ceremony at the U.S. Capitol simply followed him home, where he greeted them in the Blue Room. President Jefferson also opened the house for public tours, and it has remained open, except during wartime, ever since. In addition, he welcomed visitors to annual receptions on New Years Day and on the Fourth of July. In 1829, a horde of 20,000 Inaugural callers forced President Andrew Jackson to flee to the safety of a hotel while, on the lawn, aides filled washtubs with orange juice and whiskey to lure the mob out of the mud-tracked White House.After Abraham Lincolns presidency, Inaugural crowds became far too large for the White House to accommodate them comfortably. However, not until Grover Clevelands first presidency did this unsafe practice change. He held a presidential review of the troops from a flag-draped grandstand built in front of the White House. This procession evolved into the official Inaugural parade we know today. Receptions on New Years Day and the Fourth of July continued to be held until the early 1930s.President Clintons open house on January 21, 1993 renewed a venerable White House Inaugural tradition. Two thousand citizens, selected by lottery, were greeted in the Diplomatic Reception Room by President and Mrs. Clinton and Vice President and Mrs. Gore. History of the white house

6 The White House, since 1800 the official residence of the president of the United States, is located at 1600 Pennsylvania Avenue in Washington, D.C. The winner of a 1792 competition for its design was the Irish-American architect James Hoban, whose dignified neoclassical plan was a virtual copy of a project in James Gibbs's Book of Architecture (1728). As early as 1807, Benjamin Latrobe, the principal architect of the capitol, sought to improve the building by preparing designs for pavilions at either end (added that year in collaboration with Thomas Jefferson), for interior alterations, and for porticos on both fronts. After the building was burned (1814) by the British, it was reconstructed (1815-17) by Hoban, who also added (1826) the semicircular South Portico that Latrobe had proposed and completed (1829) Latrobe's rectangular North Portico. The White House was extensively remodeled (1902) by the firm of McKim, Mead, and White, which also added the East Gallery and the Executive Office Wing. Between 1948 and 1952 the building, deemed structurally unsound, was gutted and its interior structure replaced with steel framing, within which the original rooms were reconstructed. Since 1961 each First Lady has contributed to a continuing effort to refurbish the interior. The resultant enhancement has made the White House a veritable museum of decorative arts of the first quarter of the 19th century. 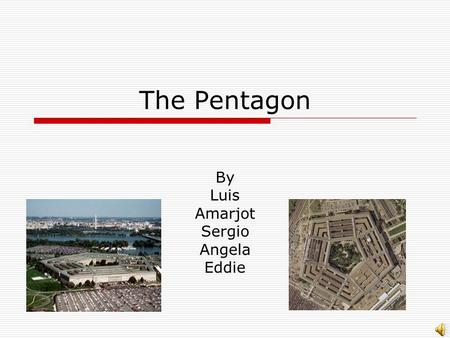 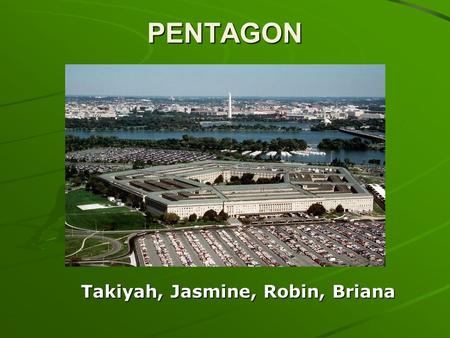 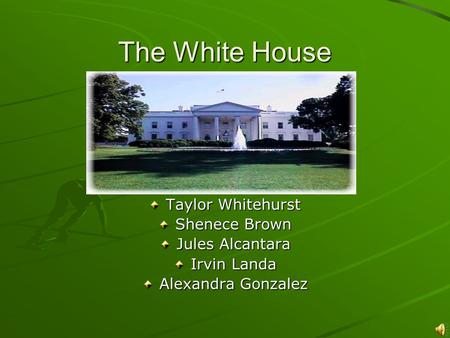 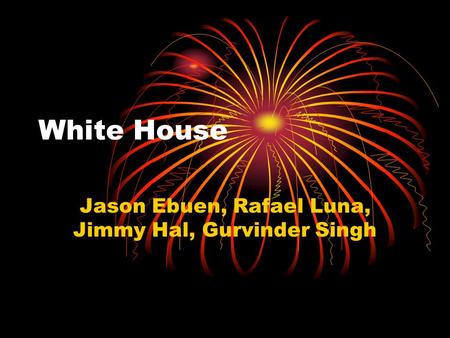 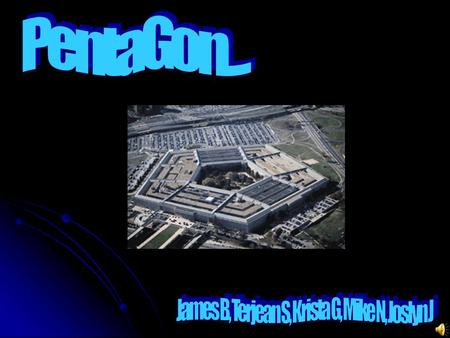 The PentagonThe Pentagon, headquarters of the Department of Defense, is one of the world's largest office buildings. It is twice the size of the Merchandise. 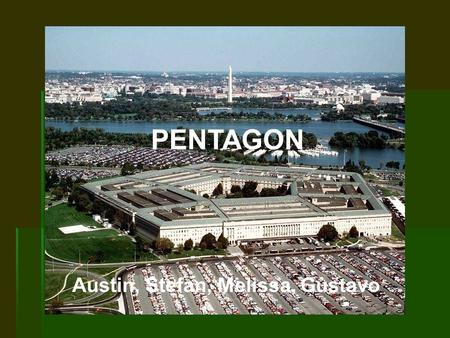 PENTAGON Austin, Stefan, Melissa, Gustavo. History The pentagon is a building used for the government. It is in the shape of a pentagon. The Pentagon, 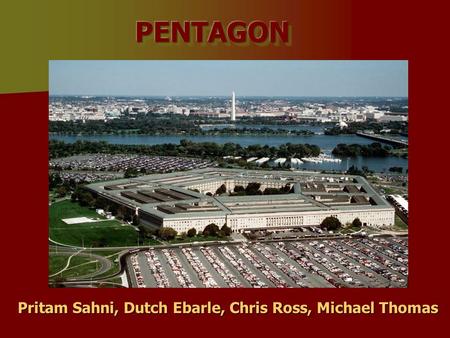 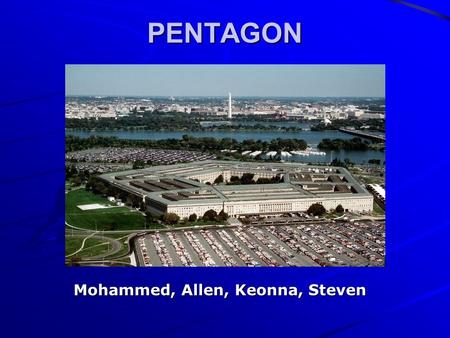 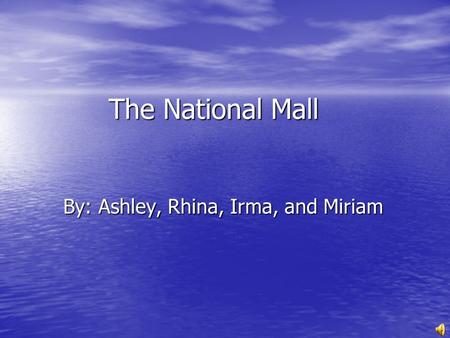 The National Mall By: Ashley, Rhina, Irma, and Miriam. 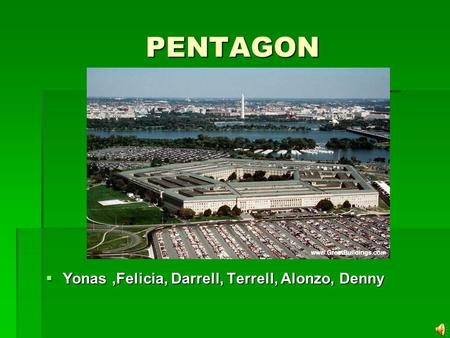 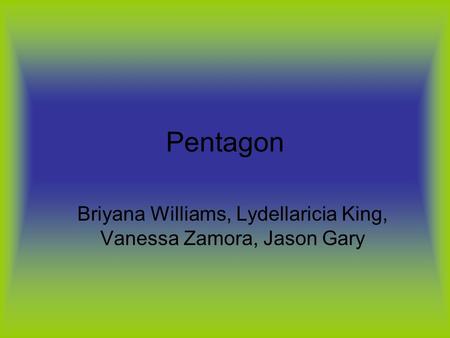 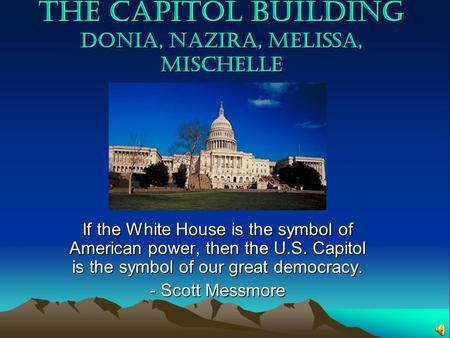 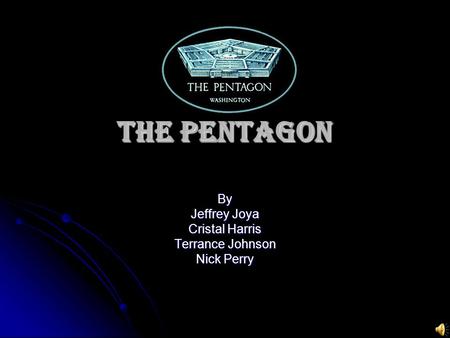 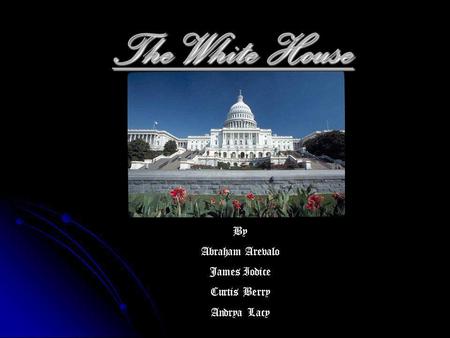 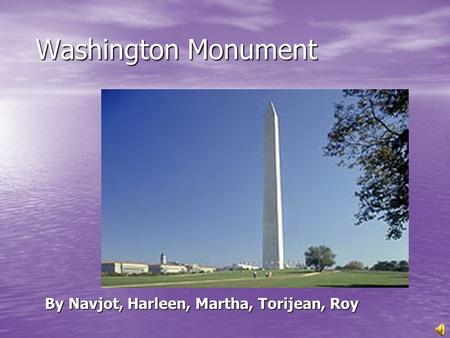 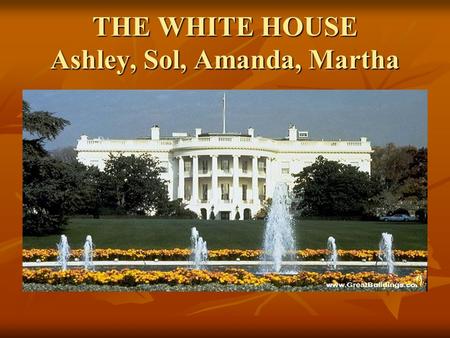 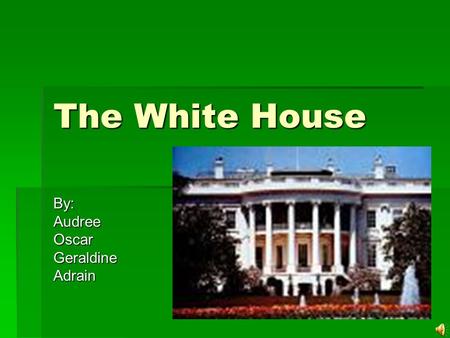 The White House By:AudreeOscarGeraldineAdrain. History For two hundred years, the White House has stood as a symbol of the Presidency, the United States. 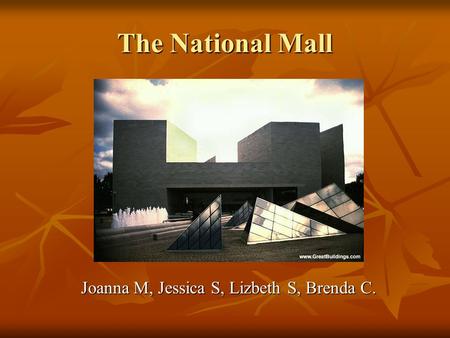 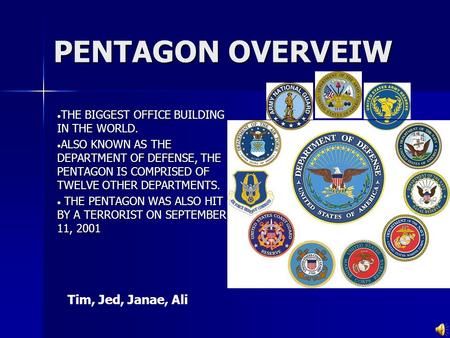 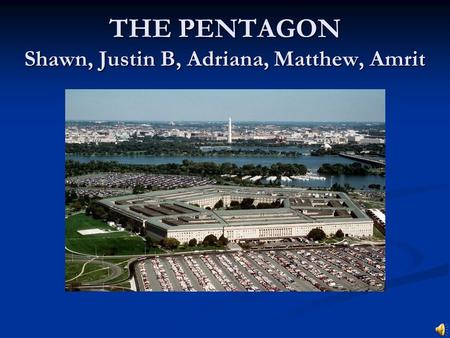