Presentation on theme: "Chapter 4: The Visual Cortex and Beyond"— Presentation transcript:

1 Chapter 4: The Visual Cortex and Beyond

2 Overview of Questions How can brain damage affect a person’s perception? Are there separate brain areas that determine our perception of different qualities?

3 Figure 4.1 (a) Side view of the visual system, showing the three major sites: the eye, the lateral geniculate nucleus, and the visual cortex. (b) Visual system showing how some of the nerve fibers from the retina cross over to the opposite side of the brain at the optic chiasm.

4 Pathway from Retina to Cortex
Signals from the retina travel through the optic nerve to the Lateral geniculate nucleus (LGN) Primary visual receiving area in the occipital lobe (the striate cortex) And then through two pathways to the temporal lobe and the parietal lobe The instructor should also note the location of the superior colliculus which controls eye movements and receives about 10% of the fibers from the optic nerve.

9 Figure 2.17 Recording electrical signals from a fiber in the optic nerve of an anesthetized cat. Each point on the screen corresponds to a point on the cat’s retina.

13 The Map on the Striate Cortex
Cortex shows retinotopic map. Electrodes that recorded activation from a cat’s visual cortex show: Receptive fields on the retina that overlap also overlap in the cortex. It might be helpful here to explain how the Hubel and Wiesel experiment works. Stimuli are shown on specific points on the retina to find the stimulus and the receptive field that stimulates a neuron in the cortex that is being monitored by an electrode. This is also a good place to discuss ethics in the use of the animals for research, if the instructor desires to do so.

15 Figure 4.6 (a) The receptive field of a simple cortical cell.
(b) This cell responds best to a vertical bar of light that covers the excitatory area of the receptive field. The response decreases as the bar is tilted so that it also covers the inhibitory area.

16 Orientation tuning curve of a simple cortical cell for a neuron that responds best to a vertical bar (orientation = 0). (From Hubel & Wiesel, 1959.)

18 Figure 4.8 (a) Response of a complex cell recorded from the visual cortex of a cat. The stimulus bar is moved back and forth across the receptive field. The cell fires best when the bar is positioned with a specific orientation and is moved in a specific direction

19 Response of an end-stopped cell recorded from the visual cortex of the cat. The stimulus is indicated by the light area on the left. This cell responds best to a medium-sized corner that is moving up (*).

20 Neurons in Striate Cortex – Edge detector
End-stopped cells Respond to: Moving lines of specific length Moving corners or angles No response to: Stimuli that are too long

23 Vision Visualized With FMRI Fovea Periphery
Figure 4.17 (a) Red and blue areas show the extent of stimuli that were presented while a person was in an fMRI scanner. (b) Red and blue indicates areas of the brain activated by the stimulation in (a). (From Dougherty et al., 2003.)

25 Figure 4.14 The magnification factor in the visual system: The small area of the fovea is represented by a large area on the visual cortex.

26 Maps and Columns in the Striate Cortex
Cortical magnification factor Fovea has more cortical space than expected Fovea accounts for .01% of retina Signals from fovea account for 8% to 10% of the visual cortex This provides extra processing for high-acuity tasks.

27 Figure 4.24 How a tree creates an image on the retina and a pattern of activation on the cortex.

28 Other Cortical Areas Vision begins to processed by V1-V5
Then goes to other lobes of the brain for further processing. What we have seen. Object identification. Where we have it. Locating object in world.

29 Figure 4.27 The monkey cortex, showing the what and the where pathways. The where pathway is also called the how pathway. (From Mishkin, Ungerleider, & Macko, 1983.)

30 What and Where (How) Pathways
Where pathway may actually be “How” pathway Dorsal stream shows function for both location and for action. Evidence from neuropsychology Single dissociations: two functions involve different mechanisms Double dissociations: two functions involve different mechanisms and operate independently Note that neuropsychology involves the study of the behavioral effects of brain damage.

34 Modularity: Structures for Faces, Places, and Bodies
Module - a brain structure that processes information about specific stimuli Inferotemporal (IT) cortex in monkeys Responds best to faces with little response to non-face stimuli Temporal lobe damage in humans results in prosopagnosia.

36 Figure 4.33 Size of response of a neuron in the monkey’s IT cortex that responds to face stimuli but not to nonface stimuli. (Based on data from Rolls & Tovee, 1995.) 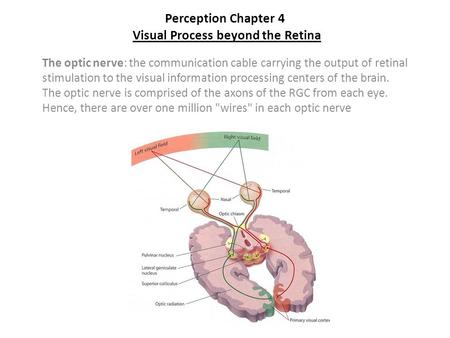 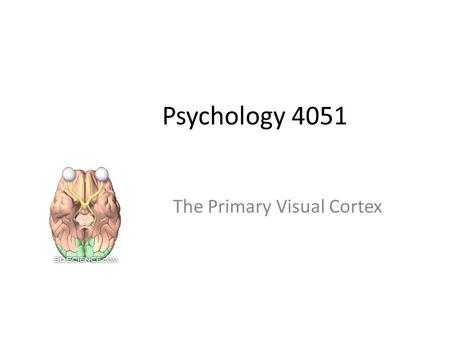 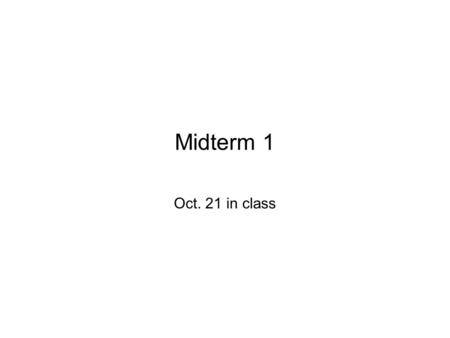 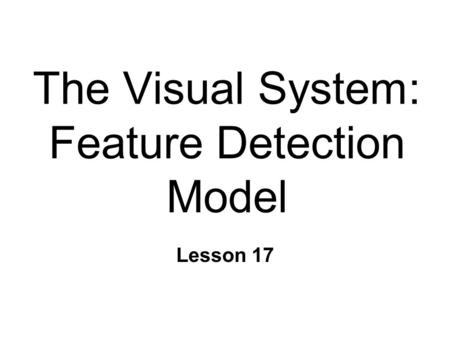 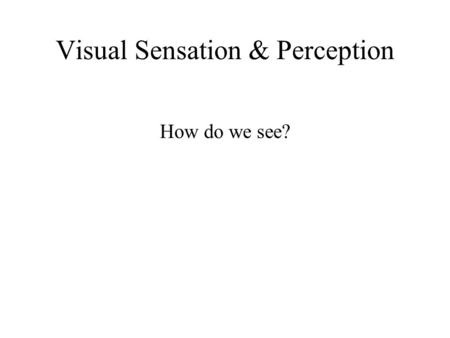 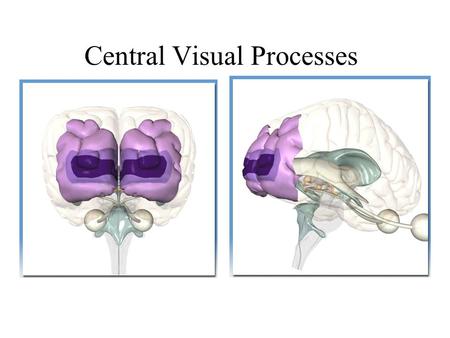 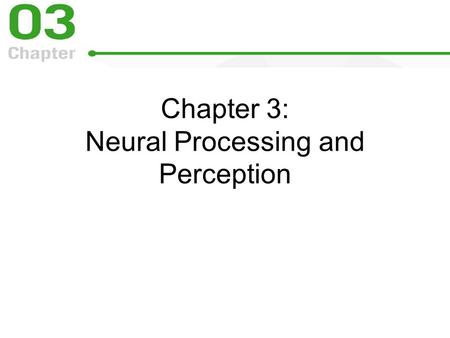 Chapter 3: Neural Processing and Perception. Lateral Inhibition and Perception Experiments with eye of Limulus –Ommatidia allow recordings from a single. 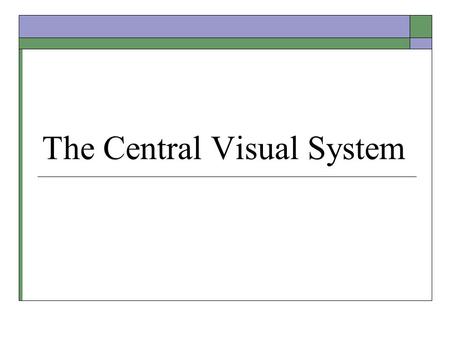 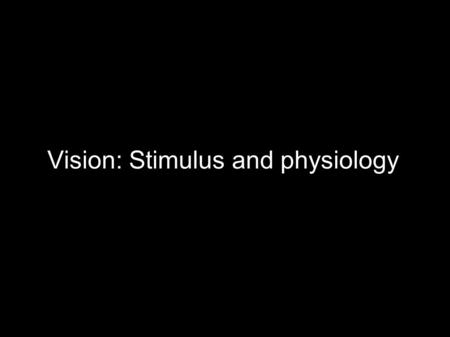 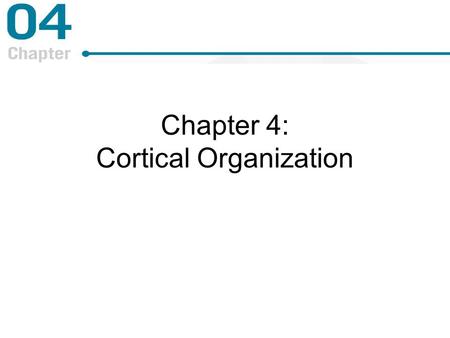 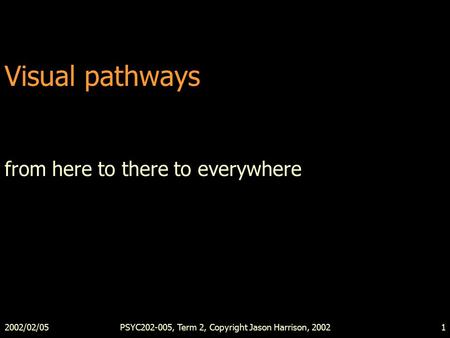 2002/02/05PSYC , Term 2, Copyright Jason Harrison, Visual pathways from here to there to everywhere. 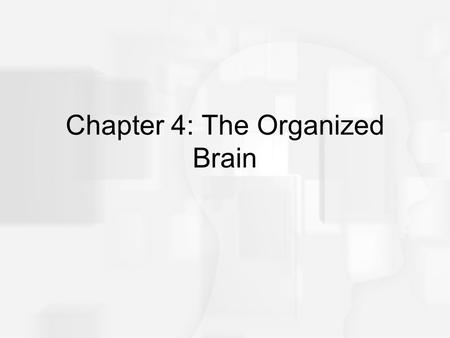 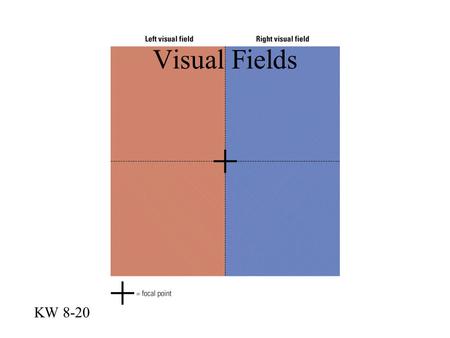 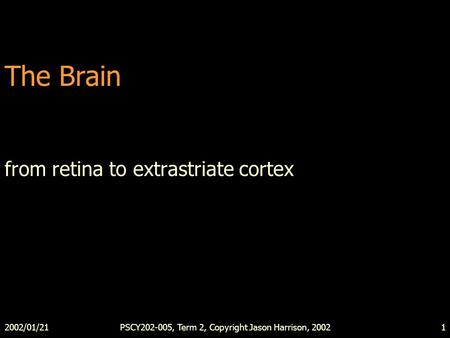 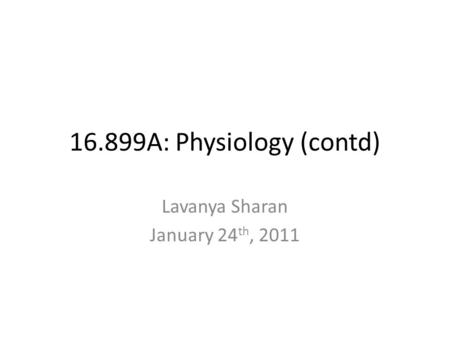 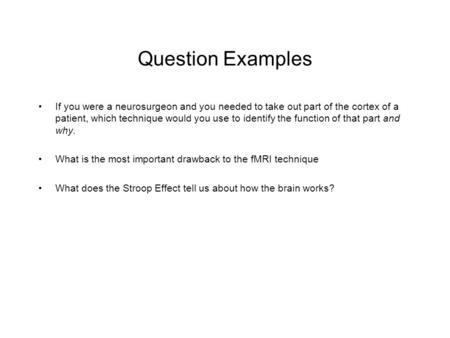 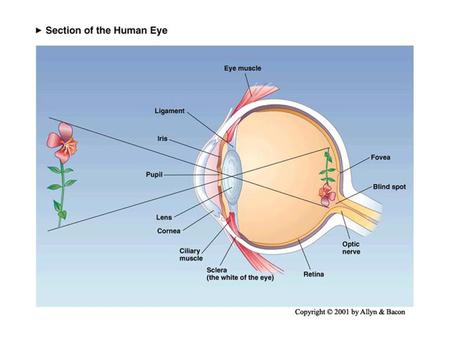 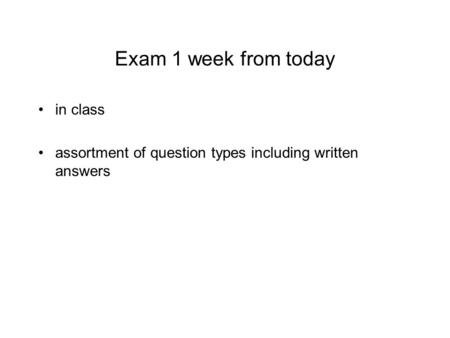 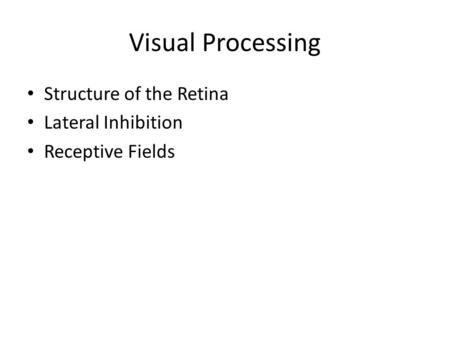 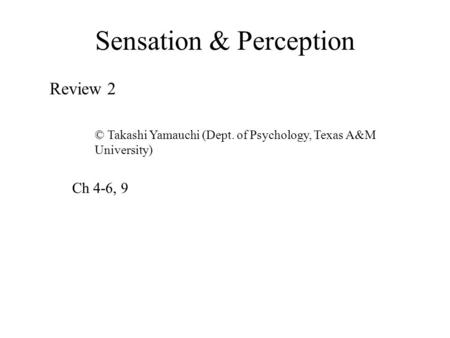