Presentation on theme: "Friends Claude Monet Using our time in Giverny to paint series – these are images depicting the same subject at different times of day, in different kinds."— Presentation transcript:

1 Friends Claude Monet Using our time in Giverny to paint series – these are images depicting the same subject at different times of day, in different kinds of light. Water lilies are my favorite! - with Eugene Boudin (Anderson 75). Eugene Boudin Now that youre living in Giverny, and youre finally rich enough to purchase a house, land, and orchards, what are you painting? Claude Monet Working on a new painting: Impression, Sunrise – its a scene of the harbor at sunrise. Im feeling great about it and think it might be a real winner! – with Frederic Bazille (Gascoigne 4). Frederic Bazille What are you painting now? Up to anything new? Claude Monet The new technique is working really well – using short brush strokes to capture the light looks great on canvas. Theyre calling our style Impressionism – with Pieree-Auguste Renoir (Johnson 2). Pierre-Auguste Renoir Loved working with you! Hows that new technique we developed working out? Lives in Giverny, France * Born on November 14, 1840 Claude Monet Eugene Boudin Pierre-Auguste Renoir Frederic Bazille

2 Eugene Boudin Pierre-Auguste Renoir Frederic Bazille Studied Art at Le Harve Secondary School of the arts * Lives in Giverny, France * Married * Born on November 14, 1840 Claude Monet About ClaudeIm one of the most influential Impressionist artist. I studied under a lot of other famous painters, but was probably most influenced by Manet (Johnson 2). In the beginning, my work was very unusual because my focus on unconventional compositions and bold colors was a big change from the Realist style popular at the time (Marcus 89). I love to watch the way light hits different objects and the way colors change depending on the sun and the time of day. Im inspired by anything outdoors, but I especially love to garden. Water Lilies are one of my favorite things. My personal life hasnt always been easy (Dudar 3). I was very poor at points, and both my wives, Camille and Alice, died before me (Anderson 1). I also lost my son, Jean. I hope I can inspire other painters to explore a more abstract style of work. Just think of the illimitable abundance and the marvelous loveliness of light, or of the beauty of the sun and moon and stars. – St. Augustine Anderson, James. Monets Waterlilies. New York: Penguin, 1987. Dudar, Helen. "When light meets water: Monet on the Mediterranean." Smithsonian July 1997: 80+. Gale Power Search. Web. 9 Feb. 2012. Gascoigne, Laura. "Glory of the garden: Laura Gascoigne manages to dodge the crowds and find something of the magic of Monet's Giverny." Spectator 6 Aug. 2011: 40+. Gale Power Search. Web. 9 Feb. 2012. Johnson, Jerry. "Not Just Pretty Gardens; The untamed beauty of Monet's last paintings." New York 24 May 2010. Gale Power Search. Web. 9 Feb. 2012. Marcus, John. Monet and Manet. Purdue U, 28 Nov. 2003. Web. 10 Feb 2012 Friends Basic Info Philosophy Favorite Quotations Resources Favorite Sources Claude Monet

3 My Paintings By Claude Monet (Albums) * Updated 1 day agoClaude Monet Although I grew up in Paris, I did some of my most important work in the town of Giverny, France. Located outside of Paris, the small European village on the right bank of the River Seine is best known for being my hometown (Anderson 1). I used color in a unique way; unlike some of other artists, I choose to use bright, shocking colors, that werent toned down with a somber golden wash used This changed how other people painted (Dudar 5). When I was 30 I fled France and moved to England to escape the Franco-Prussian War, which happened in 1870. France and the Prussian Empire had been in conflict for many years, and finally went to war. Prussia and their ally, Germany, eventually won (Jones 3). I am credited with starting the Impressionist movement. In fact, the style was named after my painting, which is titled Sunrise: Impression. Critics meant the term Impressionism as a negative, but I took it as a compliment and influenced my other painters (Dudar 7). World War I ravaged Europe from 1914-1918. My son and many of my friends fought in battle. I painted a series of weeping willow trees in remembrance of the fallen French soldiers (Anderson 1).

Download ppt "Friends Claude Monet Using our time in Giverny to paint series – these are images depicting the same subject at different times of day, in different kinds." 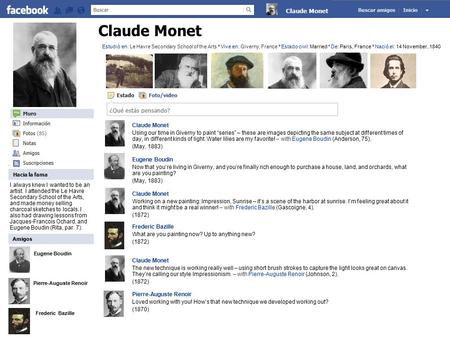 Claude Monet Using our time in Giverny to paint “series” – these are images depicting the same subject at different times of day, in different kinds of. 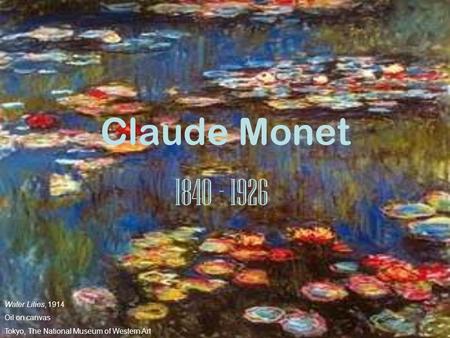 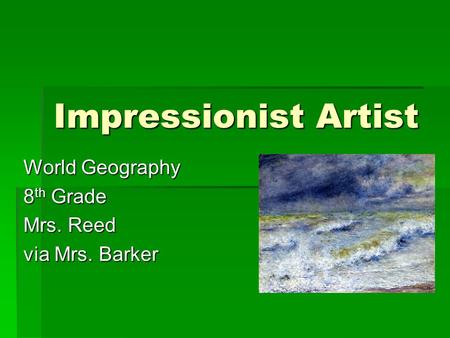 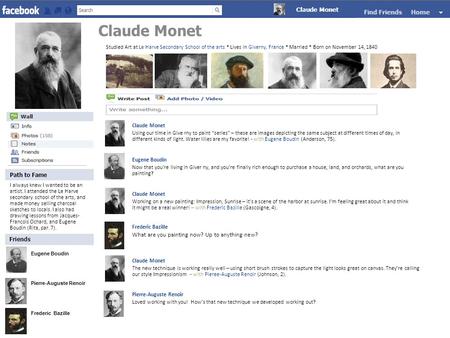 Friends Path to Fame Claude Monet Using our time in Give rny to paint “series” – these are images depicting the same subject at different times of day, 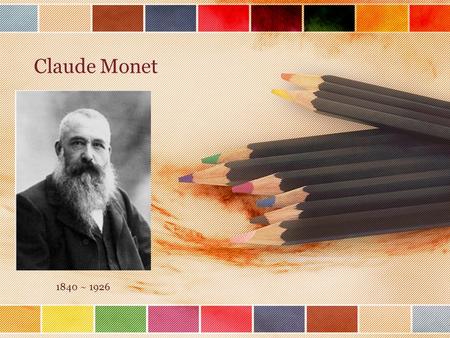 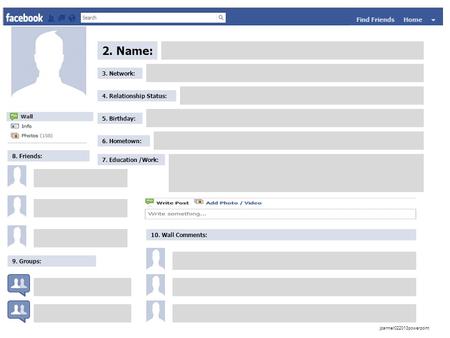 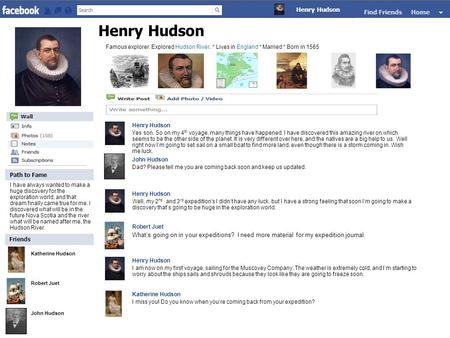 Friends Path to Fame Henry Hudson Yes son. So on my 4 th voyage, many things have happened. I have discovered this amazing river on which seems to be the. 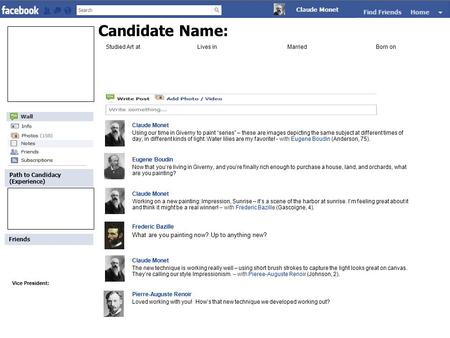 Friends Path to Candidacy (Experience) Claude Monet Using our time in Giverny to paint “series” – these are images depicting the same subject at different.