Presentation on theme: "Sexual Harassment: He Said, She Said, They Said"— Presentation transcript:

2 Program Objectives To increase understanding about MnSCU/MSU’s 1B.1 Nondiscrimination Policy and 1B.1.1 Complaint Procedure Heighten awareness about sexual harassment and prohibited consensual relationships Provide techniques and guidelines for addressing harassment

5 Consensual Relationships
MnSCU/MSU 1B.1 Policy and 1B.1.1 Procedure prohibit consensual relationships between an employee --and a student or an employee-- over whom one exercises direct or otherwise significant academic, administrative, supervisory, evaluative, counseling, or extracurricular authority or influence. Could this apply to me now or in the future? Faculty and students or supervisors and supervisees entering into a relationship where no power differential exists should be aware that power differentials may change, and should avoid situations that may become exploitative

6 Consensual Relationships
Professors are not permitted to date a student in their class, whom they advise or otherwise have any authority over. Supervisors are not permitted to date an employee, including student employees, whom they supervise or otherwise have any authority over. THERE IS NO SUCH THING AS A SECRET OFFICE OR CLASSROOM ROMANCE! Refer to InsideHigherEd, Chronicle of Higher Education… plus online news media articles….professors dating/having children with/marrying their students. The Reporter, Free Press,……. These types of articles can stall or end an academic career.

7 Can Sexual Harassment Happen to You?
Sexual harassment can occur in a variety of relationships including: Faculty - student Supervisor - employee Student - student Staff - student employee - employee and other relationships with persons having business at, or visiting the educational or working environment. LAST BULLET: VENDORS/SPORTING EVENTS/PLAYS/CONCERTS, ETC.

9 What is “Quid Pro Quo” Sexual Harassment?
Quid Pro Quo (“this for that”): Employment and academic decisions and conditions are based on whether an employee or student is willing to submit to unwelcomed sexual conduct. Occurs when an individual in a position of power pressures another individual to agree to their sexual demands. Examples: If you don’t, I will… Put up with it or I will… If you do, I will…

10 What is “Quid Pro Quo” Sexual Harassment?
What is meant by employment and academic decisions and conditions? Hiring…Firing…Tenure Promotion…Raises Better hours or job responsibilities Better office…better performance review Better grade…better internship Admission to or dismissal from a program Membership in honor societies Not reporting a disciplinary or academic matter Better reference or recommendation Or any other benefit

11 What is “Quid Pro Quo” Sexual Harassment?
What is meant by unwelcomed sexual conduct? Conduct that is not solicited or invited and the Complainant must regard the conduct as undesirable or offensive. Can one incident be a violation of the 1B.1 Policy? A single sexual advance may constitute “quid pro quo” harassment if it is linked to the granting or denial of employment or employment benefits. What was acceptable may become undesirable or offensive….then the behavior must stop.

13 What is “Hostile Environment”
Sexual Harassment? The standard used by civil rights agencies and courts in determining whether a hostile work environment exists is whether a reasonable person, in the same or similar circumstances, would find the conduct offensive. Hostile environment sexual harassment can include “same sex” sexual harassment. Factors to be considered: How offensive is the conduct? How often did the conduct occur? Conduct can include: Is the conduct physically threatening? Verbal comments Visual items Is the alleged harasser in a position of power over the student or employee? Physical acts directed at another Same sex hostile work environment: Late 90’s Cummings v. Koehnen/before Federal “Oncale” T7 same sex case. MN Case in Dakota County/judgment worth millions: Comments about ponytail/gay demeanor plus acts like grabbing employee’s head or body and simulating sex acts. Some harassing situations may not fall under protected categories, but may still be prohibited under the Workplace Environment Policy. Example: A supervisor who yells at all his or her employees.

14 Hostile Environment Claims
“North Country”: movie based on the true story of female miners who faced a wide range of abusive behaviors from male co-workers and supervisors at an Eveleth, Minnesota taconite mine. Jensen v. Eveleth Mines. Mid-70’s to Mary Stumo/Eveleth Attorney: “Nuts and Sluts” and “scorched earth” defenses. Eveleth Mines paid out more than $15 million in legal fees and settlements. “Sexual favoritism claims”: Employee who isn’t in a personal relationship with their supervisor alleges receiving unfavorable treatment in comparison to an employee who is in a personal relationship with their supervisor. Movie based on book “Class Action: The Story of Lois Jenson and the Landmark Case That Changed Sexual Harassment Law.”

15 Examples: Sexually Harassing Behavior
REGARDLESS OF HOW IT’S COMMUNICATED: HARASSMENT IS HARASSMENT!! “Rating” another individual’s body on sex appeal Leaving unwelcome, sexually explicit messages on voice mail or via or text messages. This could include “sexting.” Using language that is offensive or implies inferiority of another individual based on their sex, such as “slut” “bitch” “babe” “stud” or using sexually explicit profanity Telling off-color jokes or making teasing comments of a sexual nature Sexually explicit pictures, cartoons, t-shirts, videos, screensavers and/or posters that are not related to someone’s educational course, study content, syllabus or not related to academic freedom Discussion, jokes, lewd remarks or whistles, references to sexual matters. Sex is not an appropriate topic for the work place. Touching, hugging, patting, rubbing, pinching, getting too close to someone. Stalking/Exposure/Flashing/Leering and other body language or non-verbal communication

16 Sexual Harassment Myths and Facts
Myth or Fact? Most people enjoy sexual attention at work and school. Teasing and flirting make work and school fun. One person’s teasing may be another person’s sexual harassment. Some people may be angry or embarrassed. Comments or actions that constitute harassment may be intended as humorous or to express familiarity. This doesn’t excuse the behavior or the need to address it. Myth or Fact? If the person would just say “no”, the sexual harassment would stop. “No” sometimes works but some individuals may interpret “no” as a coy way of saying “yes.” In some situations, employees or students may be afraid to speak up. No means No. Saying no is not playing hard to get.

17 Sexual Harassment Myths and Facts
Myth or Fact? Harassment will stop if a person just ignores it. Harassers often believe that if a person ignores inappropriate/harassing behavior, that’s proof that the behavior is welcome. Many times, the behavior escalates and turns ugly…or gets worse. Myth or Fact? If people watched the way they dressed, there would be less of a problem with sexual harassment. A particular way of dressing is not permission to touch or otherwise harass. Sexual harassment has more to do with power than with how one dresses.

19 Is My Behavior “Reasonable” and Appropriate?
Court cases have determined that such behaviors will be reviewed using the “reasonable person” standard. Women and men often have different perspectives about meanings of actions or statements. Assumptions made in good faith can actually be untrue. Exercise restraint because behaviors may be “unwelcome.” If you have any doubts, simply do not do it.

20 Not a Defense An individual’s cultural background and/or upbringing are not valid defenses to illegal behavior. Nor is their career choice. Discrimination and harassment are not within the protections of academic freedom or free speech. “I didn’t mean anything by it...” is not a defense. “It was just a joke…” is not a defense. “You should be flattered…” is not a defense. Academic freedom comes with a responsibility that all members of our education community benefit from it without intimidation, exploitation or coercion. Career choice: inappropriate jokes of a sexual nature told regularly to future construction workers on college campus…allegedly to prepare them for on-site construction job.

21 Think Before Acting • Filter thoughts before speaking.
• Avoid suggestive comments about a person’s clothes or body. • Refrain from sexual jokes and innuendoes. • Consider situations from the other person’s perspective. • Don’t assume that everyone shares the same sense of humor, attitudes and comfort levels. • Recognize cultural and gender differences. • Consider personal space. • Don’t ever assume your touch is welcome. • Offensive gestures contribute to a hostile environment.

22 Before Acting…Ask yourself
Does this behavior offend or hurt others? Would I appreciate reading about my behavior or comments in the Reporter, the Mankato Free Press or the Chronicle of Higher Education? Would I want my spouse, children, or significant other to be treated in this manner? Recent Inside Higher Education articles about professors engaged in consensual relationships gone bad. Not the type of national recognition ….some were fired.

23 The Flip Side: Am I Being Targeted?
Could I be the target of someone who will try anything to get ahead? Males dating female supervisor Females dating male supervisors The List Single employees dating married supervisors What happens when the “perfect relationship” ends badly? The List…female employee created a “list” of male administrators she wanted to sleep with. “Perfect relationship” ends badly….what was consensual (not prohibited) could become SH.

25 What Can You Do If You Believe You Are Being Sexually Harassed?
Sexual harassment can escalate into sexual assault. If you feel physically threatened, remove yourself from the situation and seek help immediately from University Security at , or dial 911 for the Mankato Police Department. If the situation is not physically threatening, and you feel comfortable talking to the individual, tell them you’re offended by the comment or behavior and ask them to stop. If you’re not comfortable talking directly to the individual, you can identify a third party whom you and the other individual mutually respect and ask for their assistance in helping the two of you talk through the behavior or conduct and why you found it offensive. Document incidents of discrimination and harassment immediately after they occur – who, when, where, what was said or done, and the names of any witnesses. Keep any documentation ( s, text messages, voice messages, letters, cards, presents, etc.) Discrimination and/or harassment complaints should be submitted to the Office of Affirmative Action to determine if the complaint falls under the 1B.1 Nondiscrimination in Employment and Education Opportunity Policy or for referral to another University office. Don’t blame yourself. You have not asked for this attention. Get personal support. Don’t let feelings of self-doubt or confusion stop you from seeking help or speaking out.

26 How Do I Submit a 1B.1.1 Complaint?
Every person in our campus community has a right to submit a complaint of sexual harassment. All 1B.1 complaints are submitted to the Office of Affirmative Action. All complaints are taken in confidence, but confidentiality cannot be guaranteed throughout the investigative process. All complainants and respondents are notified in writing of the complaint being filed. All respondents will have the opportunity to respond to the allegations against them. All parties to the complaint will be kept informed during the investigation. All parties will be notified in writing of the findings of the investigation; however, the complainant will not be notified of the disciplinary action taken, if any, against the respondent. Complaints may be resolved through an informal and/or formal investigatory process. SEE BOLD SECTIONS.

29 How Does the Investigation Process Work for Sexual Harassment Complaints?
Why do complainants submit complaints: Most honestly believe they’ve been sexually harassed. However, some submit complaints to force the alleged harasser into providing an employment or academic benefit they would not normally be entitled to or to contest a bad grade. Investigator is a neutral, fact-finder…NOT an advocate The investigator is NOT the decisionmaker He said, she said, they said – analysis of and weighing testimony False statements/complaints are prohibited under the 1B.1.1 Procedure Retaliation is prohibited and could result in additional complaint(s) 1B.1.1 Part 4. Subpart E. False statements prohibited. Any individual who is determined to have provided false information in filing a discrimination report/complaint or during the investigation of such a report/complaint may be subject to disciplinary or corrective action.

Download ppt "Sexual Harassment: He Said, She Said, They Said" 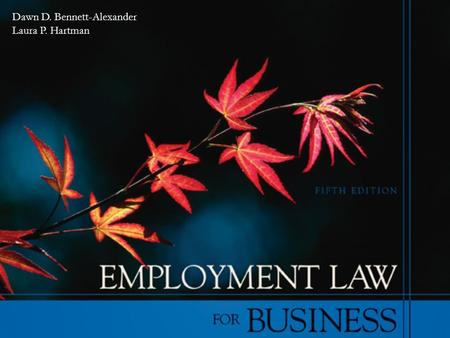 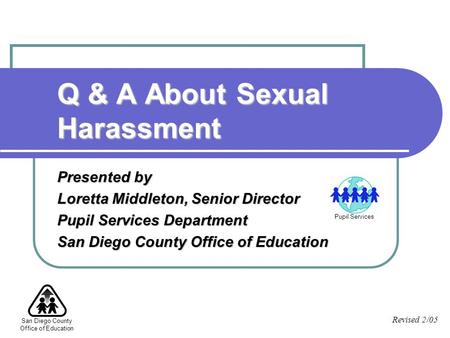 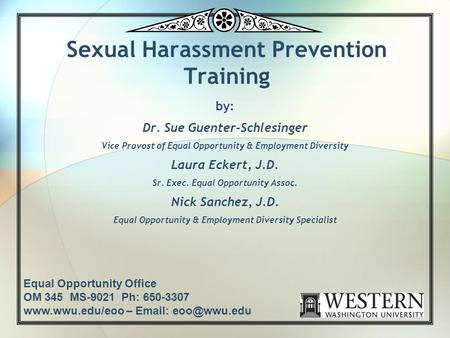 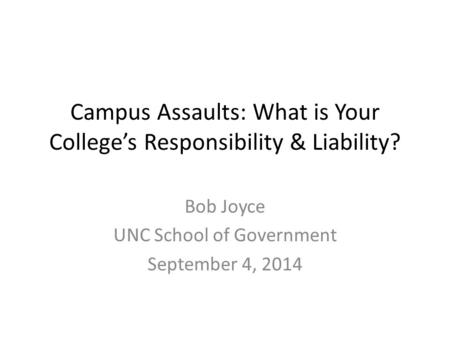 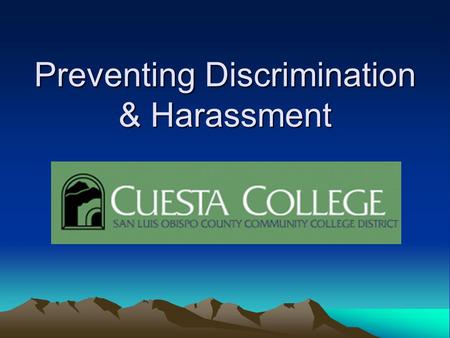 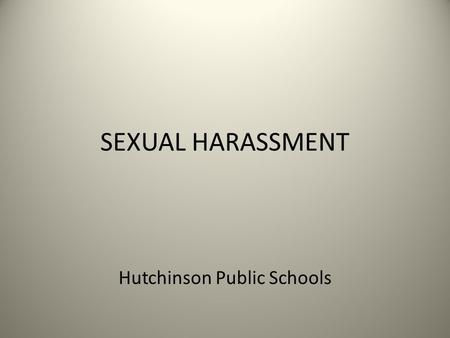 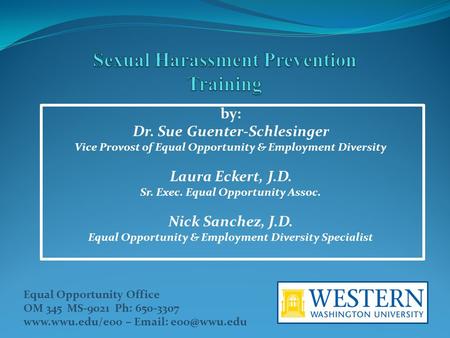 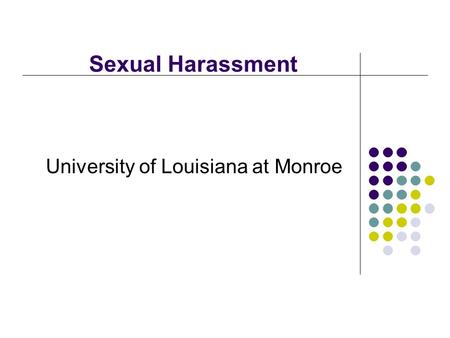 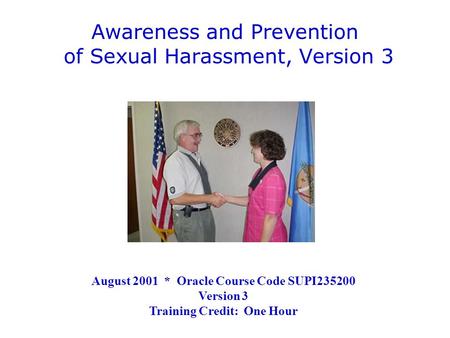 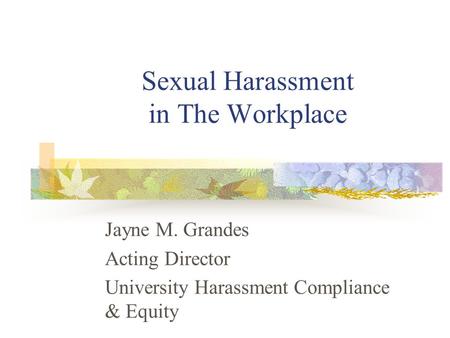 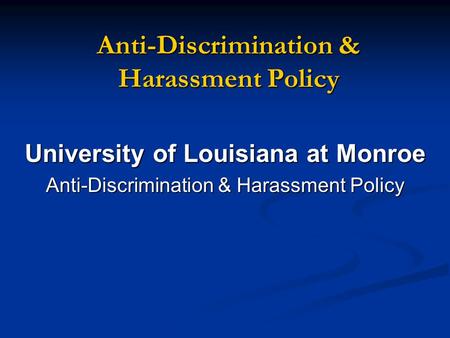 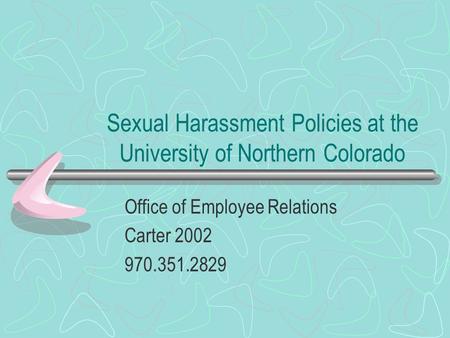 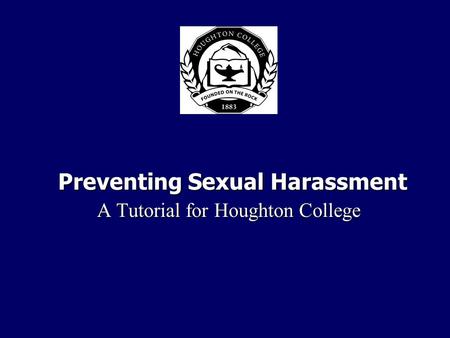 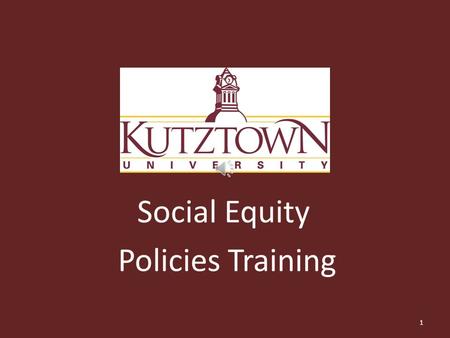 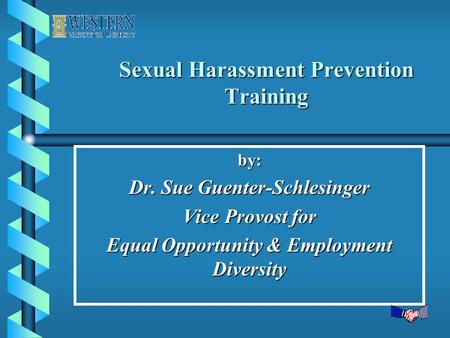