2 Refresher: what is conjugation?
Conjugation is changing the verb to match the subject of the sentence. (The subject is the person or thing doing the verb) We have already conjugated the verb être: je suis nous sommes tu es vous êtes il/elle/on est ils/elles sont Remember: only verbs can be conjugated. Not nouns, not adjectives.

8 Sample sentences using “aimer” conjugated
*Notice that “aimer” starts with a vowel, so the “je” form needs to be modified slightly. This will be true of all verbs that begin with vowels! (Such as adorer, écouter or étudier) J’aime nager. I like to swim Tu aimes nager? Do you like to swim? Il aime skier en hiver. He likes to ski in winter. Nous aimons jouer au tennis quand il fait beau. We like to play tennis when the weather is nice. Vous aimez jouer au tennis? Do you like to play tennis? Elles aiment la pizza! They like pizza!

9 Refresher: Why do we conjugate?
You may ask yourself, why do we need to learn all these different endings – we don’t have to do this in English! Well, yes you do. Conjugation in your native language comes to you by instinct. You do it without thinking. If you didn’t, you would sound like this: “Good morning, mom. Today, I to swim at the rec center. Tom, he be my friend, so we hangs out together. He are very nice. He to come over to our house this afternoon, be that okay?” What this means is, EVERY TIME you use a verb in French, you MUST think about conjugation. It is not optional! You will sound extremely awkward if you do not do it, you will not be able to communicate well, and your grade will suffer.

10 So, then, what’s up with all those infinitives?
You may have noticed with the “aimer” sentence samples (two slides ago) that there were quite a few infinitives! Yet, on the last slide, I said to think about conjugation with EVERY VERB! And this is true. This means think about conjugation – it doesn’t mean that every verb gets conjugated all the time. It means think. Example: J’aime nager. = I like to swim. “Aimer” gets conjugated (j’aime) but notice that the English equivalent is “to swim.” An infinitive! So, when there are two verbs back to back, the first verb is conjugated, the second one is not. Other times when this will happen will be, for example, “I want to eat.” “She is able to play.” “My brother needs to clean.” So… did I mention, think about what you’re doing?

11 Refresher: How to make a negative
In English, in general, we add “do not” or “does not” before a verb to express a negative. In French, “ne… pas” is used. The “…” is a conjugated verb. Examples: Elle ne mange pas la pizza. = She does not eat pizza. Nous ne parlons pas francais. = We do not speak French. Je n’aime pas étudier. = I do not like to study. **Ne and pas do not belong together!

13 Why did we learn about weather last week, and verbs this week?
The idea is for you to be able to discuss what you like to do in the certain seasons, and in certain weather conditions. If you have not already done so, please download the handout from the website that says “Les Passe-temps” at the top (these are “pasttimes). There is another handout that has pictures of folks doing things, and gives you sample sentences to describe them. Have a hard copies of both in front of you, as well as your notes on the weather and seasons.

14 Questions The very first verbs at the tope of “Les Passe-temps” will help you describe what you like and dislike to do. Next, you see “En automne, en hiver, en été, au printemps.” These are the four seasons, with “in” in front of them. Notice that “printemps” (spring) has “au”. And then, there is a question: “Qu’est-ce que tu aimes faire?” This asks “What is it that you like to do?” So, when someone asks you, “En hiver, qu’est-ce que tu aimes faire?” What are they asking? How might you answer? **Notice that we saw “est-ce que,” or “is it that,” a little while ago. This is “qu’est-ce que,” or “what is it that.” Being able to tell the difference is vital.

17 Sports! Most names of sporting games are cognates in French and in English. When you refer to playing a sport, use the verb “jouer,” to play, followed by “au” or “à la”. J’aime… jouer au tennis jouer au basketball jouer au football (soccer) jouer au baseball jouer au football américain jouer au tennis jouer au hockey jouer au volleyball jouer à la crosse *Notice that swimming and skiing are sports, but they don’t have “play” in front of them either in French or in English! Same goes for track and field events, diving, etc. **For sports that end in “ball,” usually the “ball” can be left off. Baseball is an exception. So, it’s fine to say, “Je joue au basket.”

18 Practice! Translate these sentences
In summer, I like to hang out with friends. We do not like to ski in April. Louis hates to stay home when it’s sunny. Do you eat pizza? (informal) Elise and Marie play soccer in the fall. I am resting. Olivier is not buying a TV. We are dancing in the snow! Are you listening? (plural) I hate to study in July when it’s beautiful! 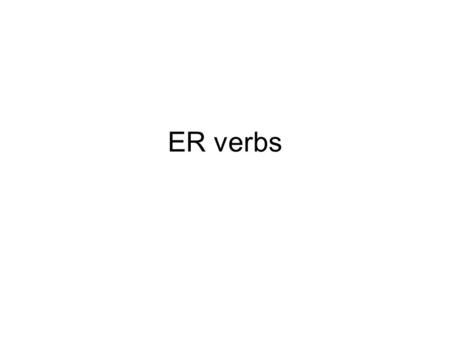 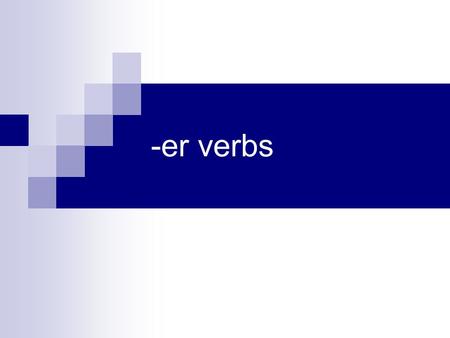 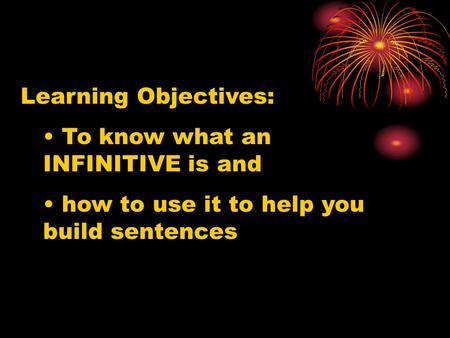 Learning Objectives: To know what an INFINITIVE is and how to use it to help you build sentences. 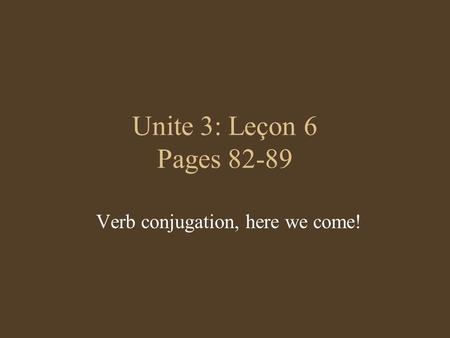 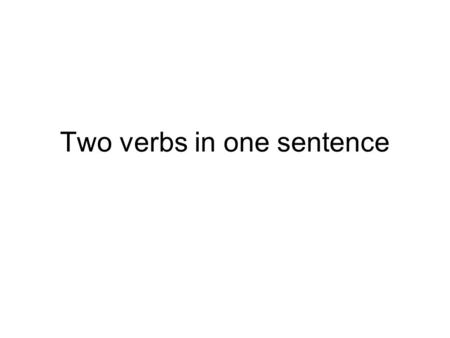 Two verbs in one sentence 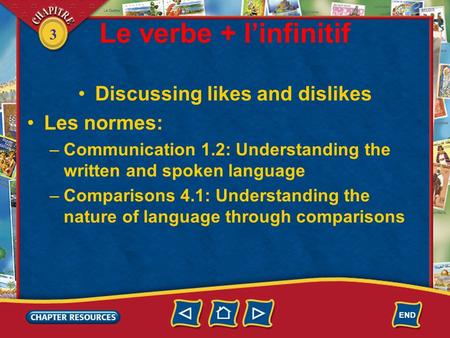 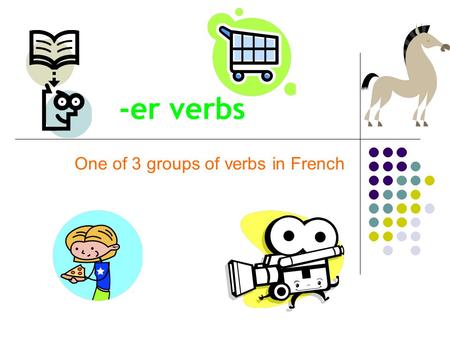 One of 3 groups of verbs in French 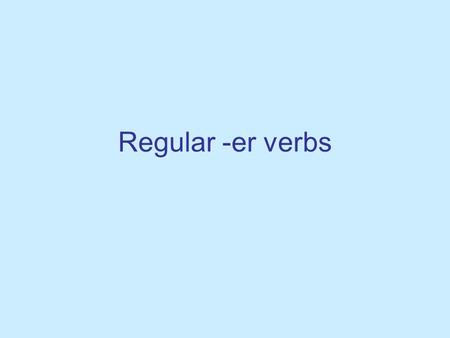 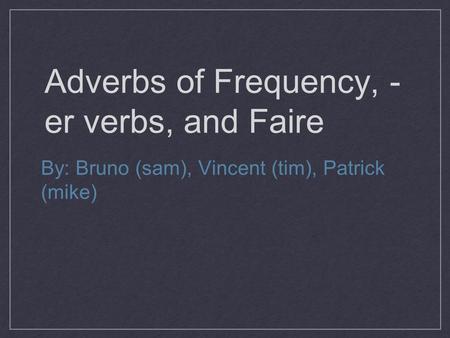 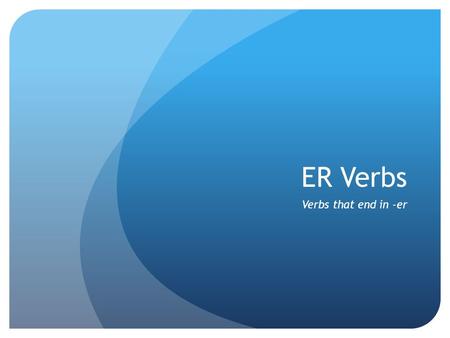 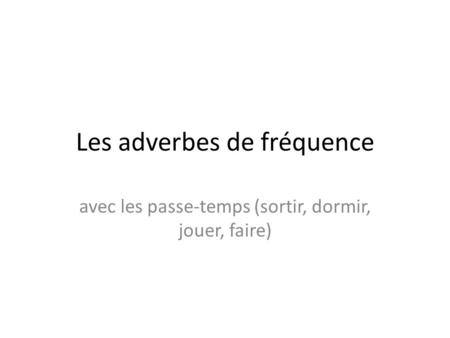 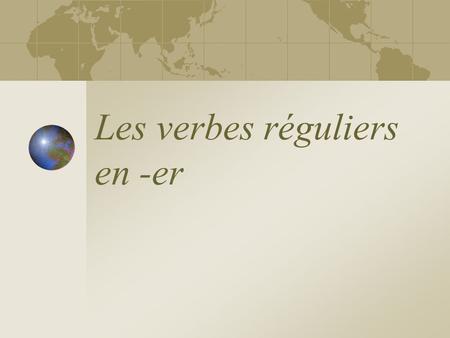 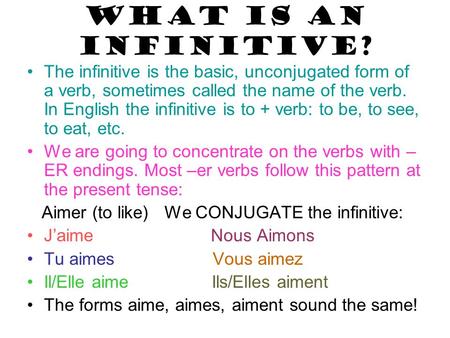 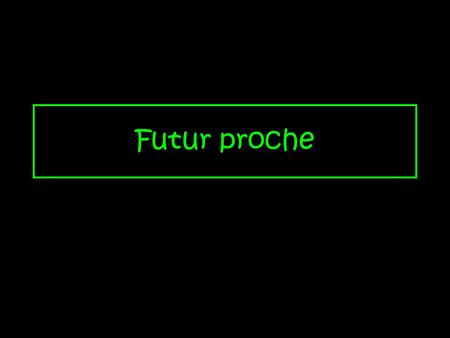 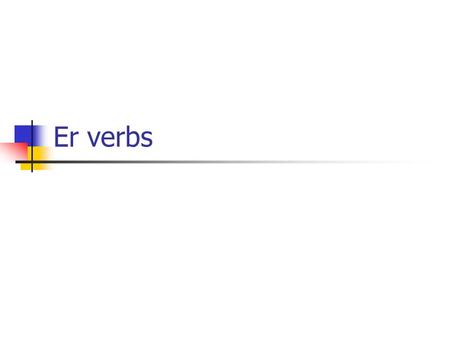 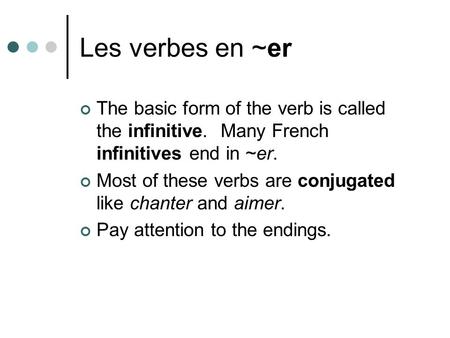 Les verbes en ~er The basic form of the verb is called the infinitive. Many French infinitives end in ~er. Most of these verbs are conjugated like chanter. 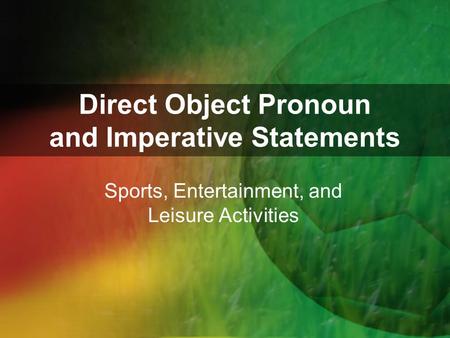 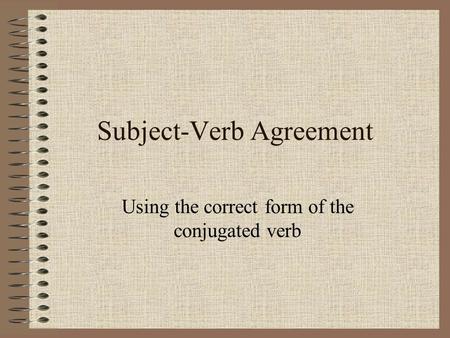 Subject-Verb Agreement Using the correct form of the conjugated verb. 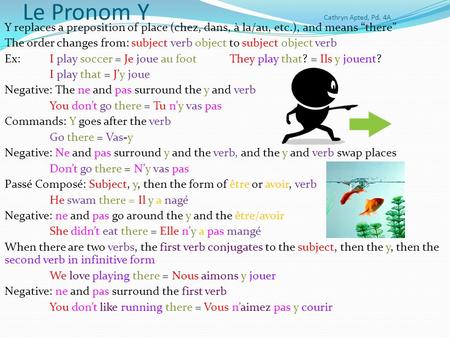 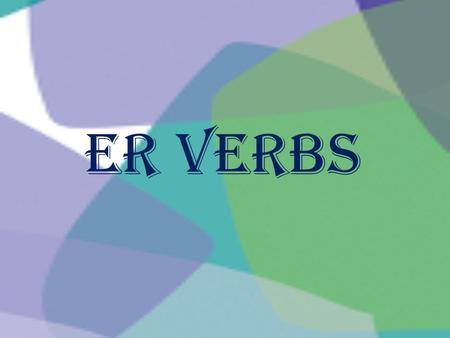 ER Verbs. ER verbs have special rules for putting them in a sentence because you wouldnt just say She to eat. You would say she eats.