1 Project: IEEE P802.15 Interest Group for Wireless Personal Area Networks (WPANs)
Submission Title: ITS OCC system based vehicle-to-vehicle communication Date Submitted: July 2018 Source: Thanh Luan Vu and Yeong Min Jang [Kookmin University]. Contact: Re: Abstract: Introduce OCC technology applied into the V2X system and architecture of ITS OCC based V2V communication Purpose: To introduce OCC in ITS system and provide architecture of ITS OCC based on V2V communication Notice: This document has been prepared to assist the IEEE P It is offered as a basis for discussion and is not binding on the contributing individual(s) or organization(s). The material in this document is subject to change in form and content after further study. The contributor(s) reserve(s) the right to add, amend or withdraw material contained herein. Release: The contributor acknowledges and accepts that this contribution becomes the property of IEEE and may be made publicly available by P

3 Introduction Optical Camera Communication (OCC), part of Optical Wireless Communication, is developing in many new research and development areas due to its advantages over radio-frequency (RF). OCC comprise of light emitting diodes (LED) for transmitting the data which acts as transmitter (Tx) and image sensor (camera) for receiving the information from the LEDs which is defined as receiver (Rx). OCC use visible light spectrum, it ensures security due to its line-of-sight (LOS) functionality. OCC has been used in many vehicular communications scenario in both industry and academy. This proves the feasibility and possibility of OCC scheme in V2X communication. OCC has also been used in many application, such as digital signage, localization, ToF based distance measurement, and etc.

4 Architecture of OCC system
TX RX Architecture of OCC system: Transmitter and Receiver OCC consists of Tx unit, Rx unit with modulator and demodulator connected with it in order to transmit and receive the data simultaneously. The Tx unit and Rx unit are run by modulated light sources which are received by the image sensor. These units can be any kind of end devices, such as vehicles, infrastructures, traffic lights, rear/head-lights of vehicles.

5 V2I and V2V communication using OCC
Example of V2I and V2V communication using OCC OCC uses vehicle backlight LED lights or traffic lights as Tx and camera (webcam or high-speed camera) as Rx. Here, the Tx (traffic light or vehicles rear LEDs) transmit the vehicles status (speed, safety information, emergency message, and etc.) or the traffic condition. The receiver can be a single or pair of image sensor which receives the transmitted information from the Tx.

7 Intelligent Transportation Systems (ITS) Scenario
Data available from vehicles and road side units can be either consumed locally in the boundary of a geolocalized network or transmitted to a server for central fusion and processing. ITS scenario These data can be used to detect events such as road works, traffic jam, approaching emergency vehicle, etc. Such data are processed in order to produce driving recommendation dedicated to a single or a specific group of drivers and transmitted wirelessly to vehicles.

9 OCC in Intelligent Transportation Systems (ITS)
OCC-based ITS communication overview The ITS infrastructure and the ITS ad-hoc network are networks specifically designed to accommodate and implement ITS services and applications. They are interconnected and connected to public access, private access, and local data networks via ITS-SU 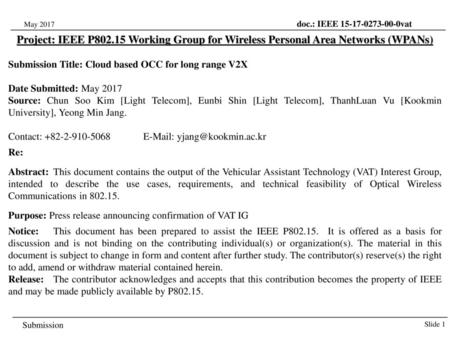 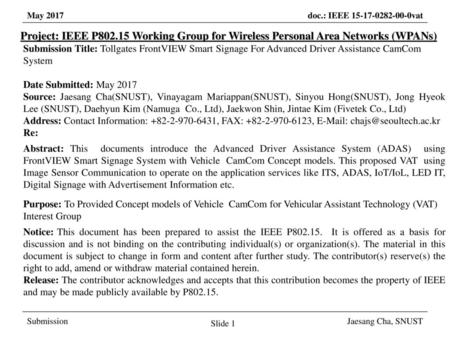 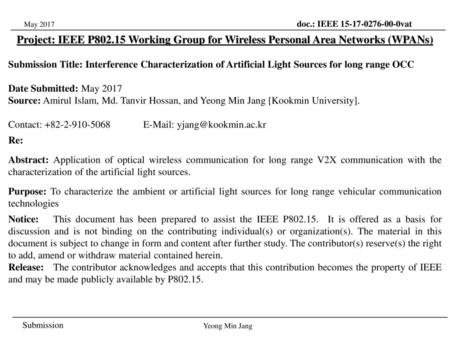 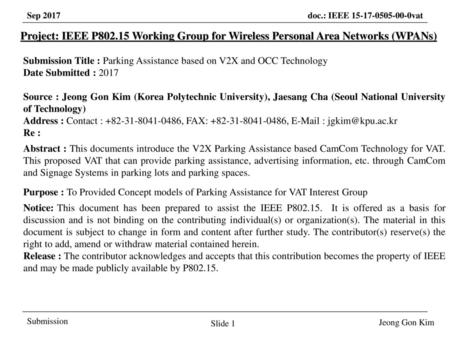 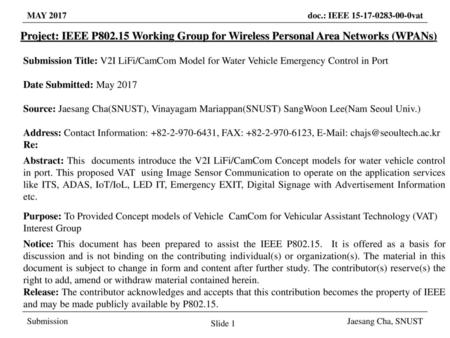 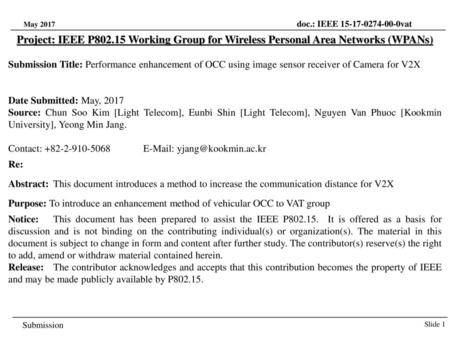 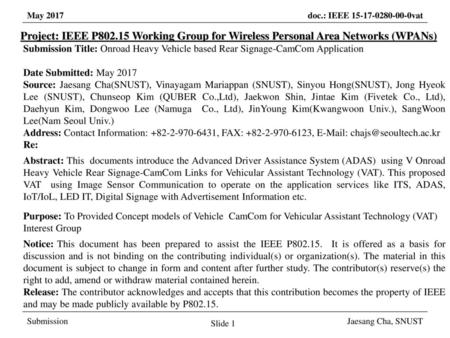 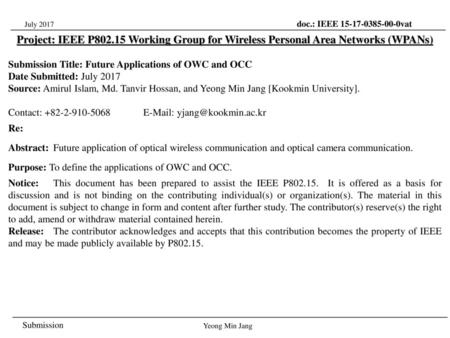 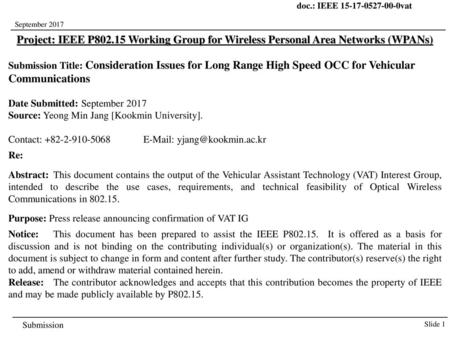 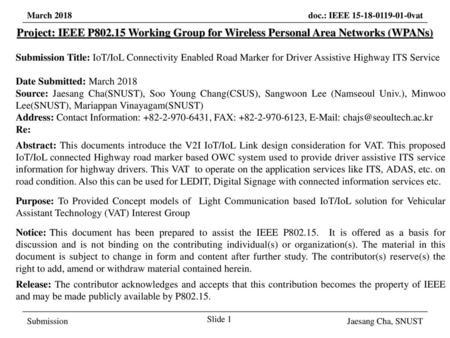 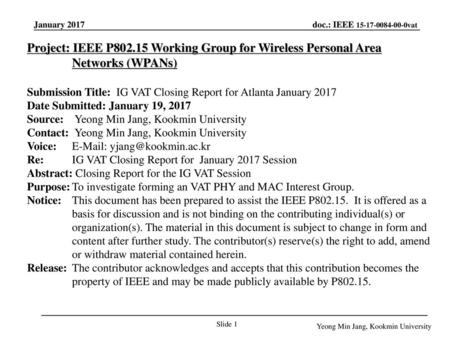 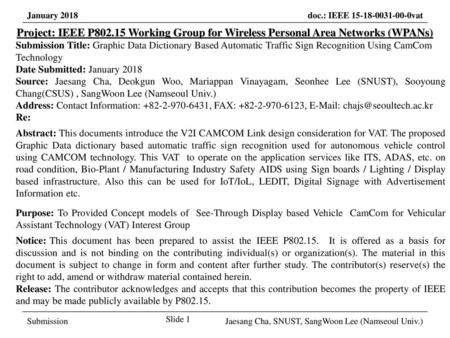 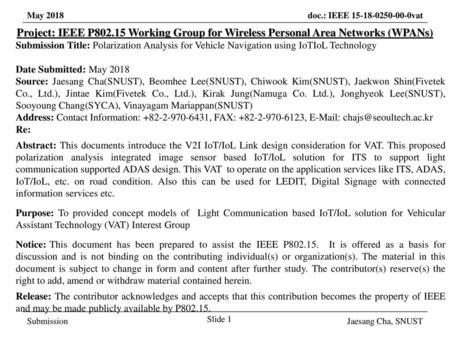 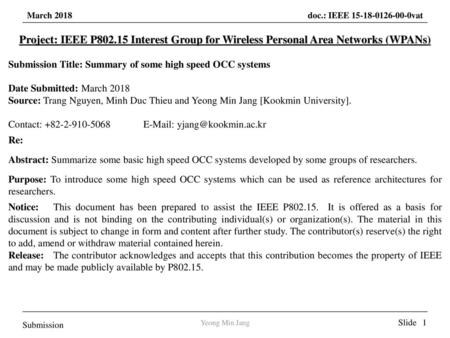 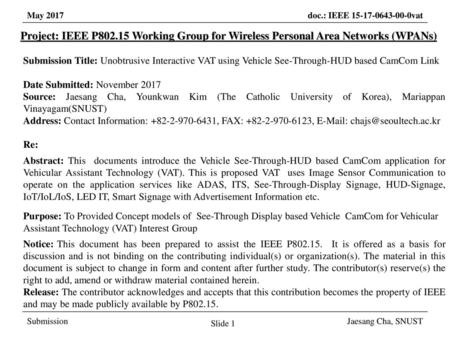 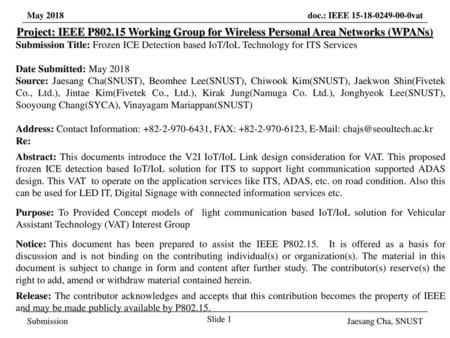 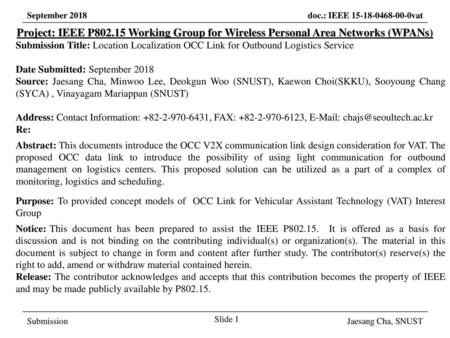 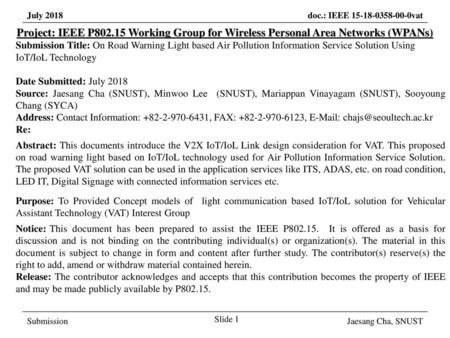 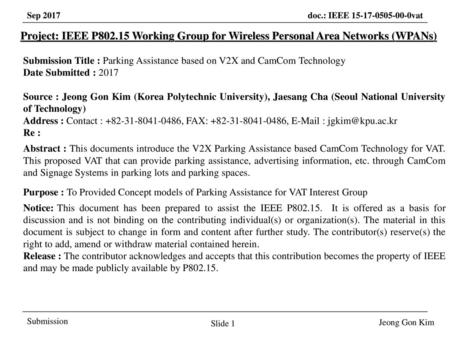 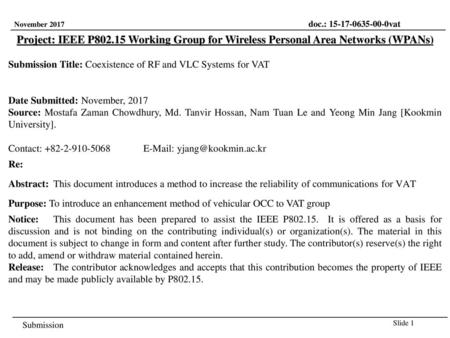