3 Blood Spatter Bloodstain or spatter patterns explain
Explain about positions & movements during the crime Provide information such as who struck whom first in what manner how many times Scrupulous analysis can destroy alibi and self-defense arguments for a crime.

4 Laws of Physics Liquid particles exert electromagnetic force of attraction on each other.  Cohesive forces  affect properties of liquid extensively On surface of liquids, cohesive forces become stronger than particles in the inner layers of the liquid because there are no neighboring atoms above.  Exhibits stronger attractive forces upon nearest neighbors on surface.  Called surface tension tendency of surface of liquid to contract in order to possess smallest area possible

5 Surface Tension’s Role
Gravitational force acting on blood must exceed its surface tension before a drop of blood can fall.  Otherwise, no blood drop since will behave like slime or sludge.  No matter how high a drop of blood falls, surface tension minimizes spattering before impacting a smooth, hard surface such as glass.  A drop of blood will scatter away into many small spatters without surface tension.  More problems for investigators, who would be wasting tremendous time by collecting pointless evidence

6 Blood Spatter Analysis
Crime scene investigators often want to reconstruct the exact position where the crime has occurred.  Blood spatter analysis can be used  A blood spatter analysis can provide two pieces of information.  Direction in which the droplet was traveling Impact angle is the angles at which blood droplets struck a horizontal surface such as the floor.

7 Blood Spatter Shapes round or ellipse to oval shape If blood drops from directly above, will have round shape depending on the surface texture If some impact on the droplet, such as from a gunshot or any penetrating wounding agent, an elliptical or oval shape is formed.  Long axis of the ellipse indicates direction blood has traveled from.    From this analysis, the point of convergence in two-dimensional plan can be determined.

8 Blood Spatter Analysis
Thicker side of the elliptical stain is where blood has traveled Opposite of the thicker side (thinner side with tail looks) is where the origin of blood droplet was coming from  Impact angle of blood on a flat surface can be obtained by measuring degree of circular distortion of the stain By using the equation shown in the diagram, impact angle is calculated with width and length of the bloodstain This measurement, combined with the point of convergence will locate the origin in three-dimensional space.    Because there will be a lot of blood spatter in a crime scene, investigator usually draws lines with strings at the crime scene or use CAD software to improve the view of blood flight paths.

9 Blood Spatter: Surface Texture
As shown on right-hand side, surface texture is one of key components in determining spatter type. The harder the surface, less splatter Extremely important to duplicate the surface in a controlled test When a droplet of blood hits a surface that is hard &smooth, blood usually breaks apart upon the impact, causing smaller droplets, which continue to move in same direction as the original droplet. The blood drop on right struck a plastic wall tile falling from 42 inches. On the left, the drop fell from the same distance on to a piece of heavy, unusual textured wallpaper. Example based on: Flight Characteristics and Stain Patterns of Human Blood, Herbert L. MacDonell (Washington DC: US Government Printing office,1971), pp. 36,37

13 General Rules to Consider for Blood Spatter Analysis
The smaller the size of blood spatters, the greater the energy required to produce them.  Low, medium, and high velocity impact spatter may be identified by their respective sizes but exceptions must also be considered. Before a drop of blood can fall, absent any other form of applied energy, gravitational attraction acting on blood must exceed its surface tension. Diameter of a large bloodstain will be of little or no value in estimating the distance a drop of blood has fallen prior to impact.

14 General Rules to Consider for Blood Spatter Analysis
When considering the shape of a bloodstain for use in calculating its angle of impact, only a sharp, well-defined bloodstain should be used for measuring its width and length. Directionality of a blood drop while in flight is usually obvious from the geometry of its resulting bloodstain.  The pointed end indicates the direction of travel prior to impact on a surface.  Directionality may also be determined when edge scallops appear on only one side of a bloodstain. Correct interpretation of bloodstain patterns must include consideration of the surface texture of the material upon which the bloodstains have been deposited. Surface tension prevents spattering regardless of the distance a drop of blood has fallen before impacting a smooth, hard surface such as glass.

15 General Rules to Consider for Blood Spatter Analysis
Edge characteristics of a bloodstain have no value in establishing the distance a drop of blood may have fallen prior to impacting a surface unless the nature of the surface texture is considered. Conclusions as to the significance of a limited number of bloodstains should only be drawn with reservations and/or qualifications.  It should be remembered that a few bloodstains do not a pattern make.  There is nothing wrong with admitting that there are insufficient bloodstains available to form an opinion.   It is far better not to have an opinion than to have one that is incorrect. When a dozen or more small bloodstains are present in a recognizable pattern, their size may allow a prediction as to the energy that was required to produce them.  When the preponderance of individual bloodstain diameters are less than 1mm, they are consistent with having been produced as a result of a high velocity impact.  Most often they would result from a shooting.

16 General Rules to Consider for Blood Spatter Analysis
When the preponderance of dozens of individual bloodstains are approximately 1mm or more in diameter, they are consistent with having been produced as a result of a medium velocity impact.  Most often they would result from a beating or stabbing. The shape of a bloodstain is a function of the angle at which it impacts a surface.  Perfectly round bloodstains result from a ninety degree impact.  The angle of impact of an elliptical bloodstain may be calculated from its length  to width ratio. Bloodstains may often be lifted from the surface upon which they  have been deposited.  The harder and smoother the surface the more likely they may be successfully lifted. When measurements and angles are used to establish the origin or origins in space, not only will the actual origin be somewhere below the point or points of convergence, but it must be remembered that the investigator is determining a spatial volume and not a small point of origin.

17 General Rules to Consider for Blood Spatter Analysis
Sobriety of the victim will have no significant effect on how bloodstain patterns are produced.  A high blood alcohol level is of no concern to the interpretation of bloodstain patterns. When blood is projected upward with sufficient force to strike a ceiling, it will almost always be the result of a gunshot having an upward trajectory.  Such a trajectory is more often the result of a suicide rather than it is a homicide 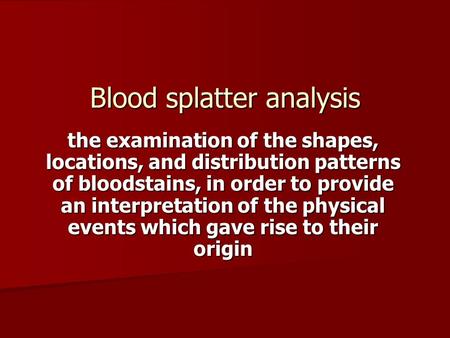 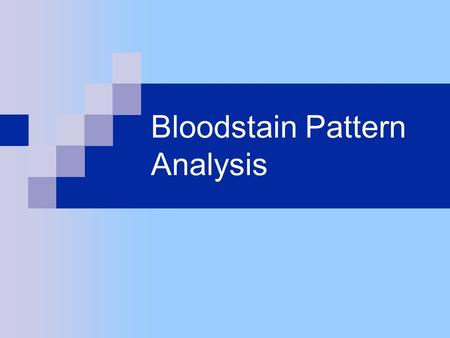 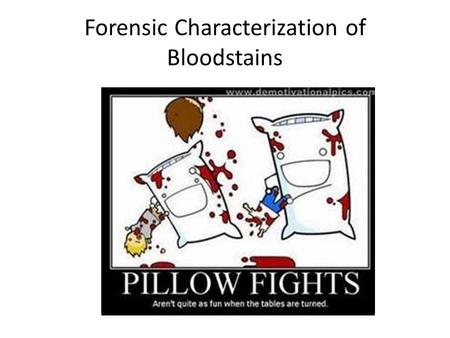 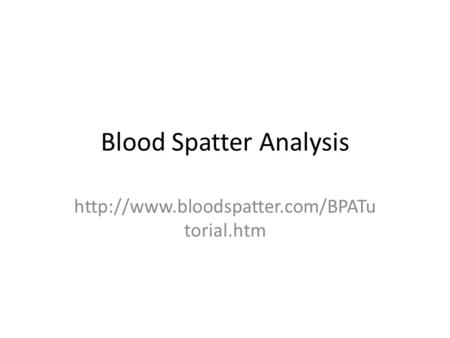 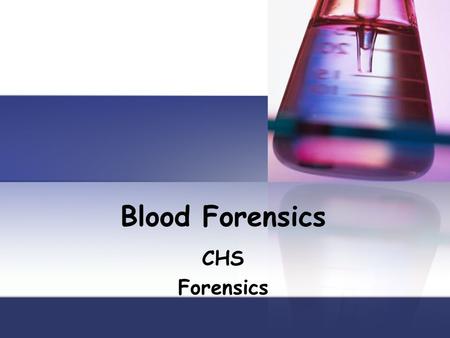 Blood Forensics CHS Forensics. Blood Volume On average, blood accounts for 8% of a persons total body weight 5 to 6 liters of blood for males 4 to 5 liters. 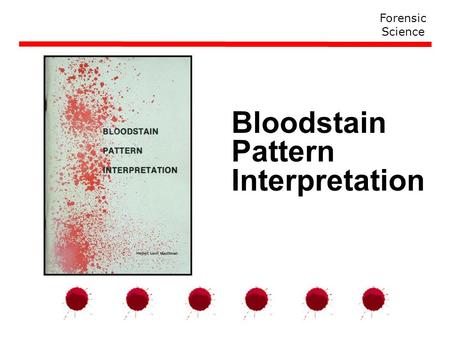 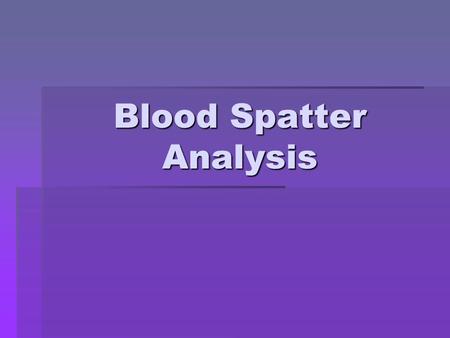 Blood Spatter Analysis. General Rules  Directionality of a blood drop while in flight is usually obvious from the geometry of its resulting bloodstain. 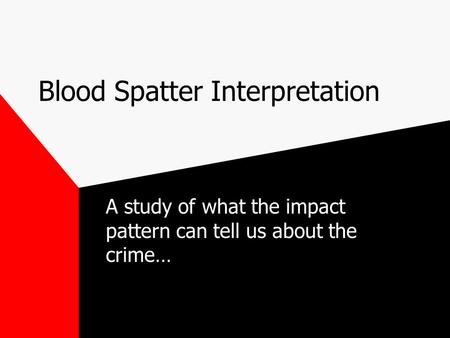 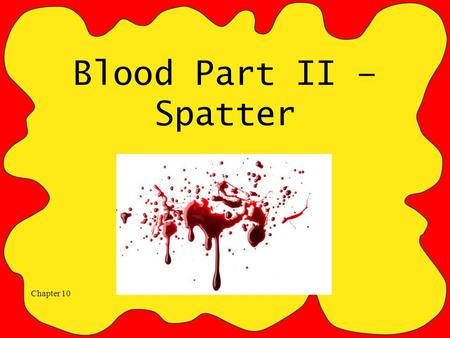 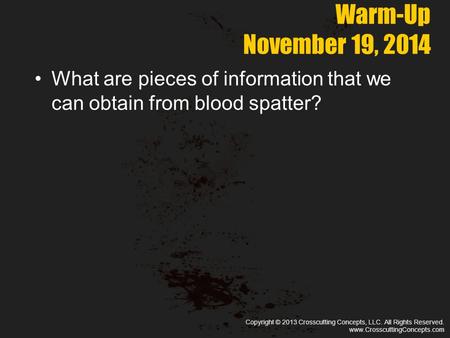 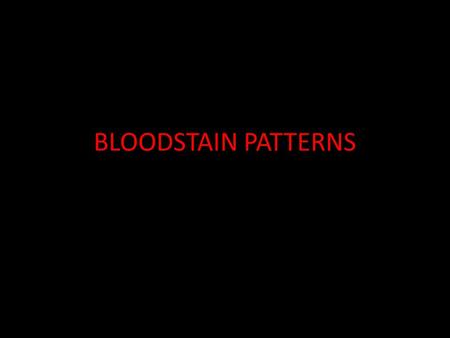 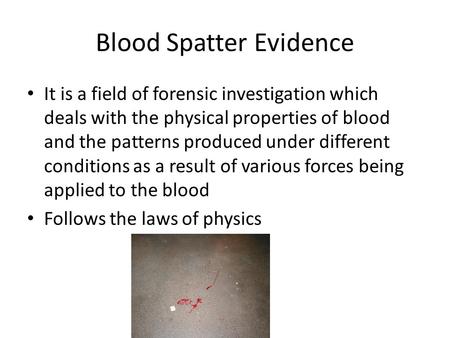 Blood Spatter Evidence It is a field of forensic investigation which deals with the physical properties of blood and the patterns produced under different. 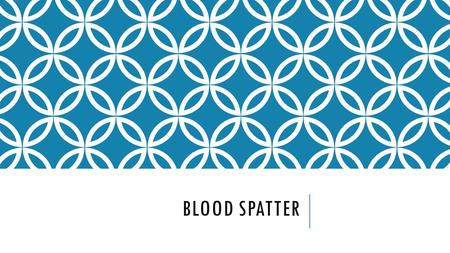 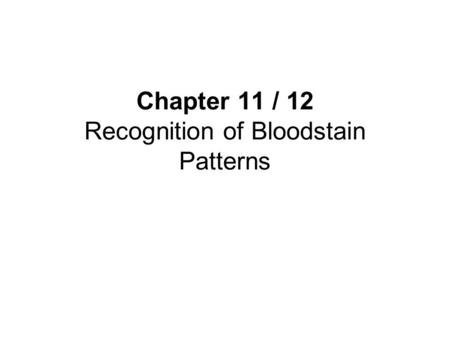 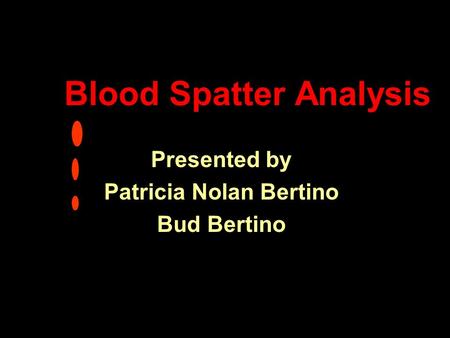 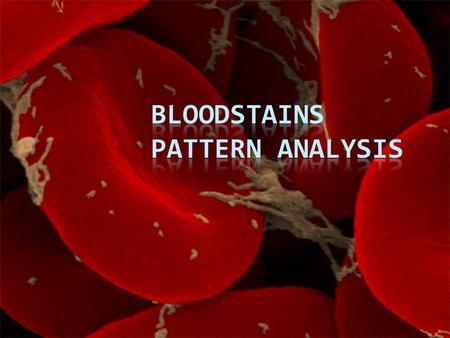 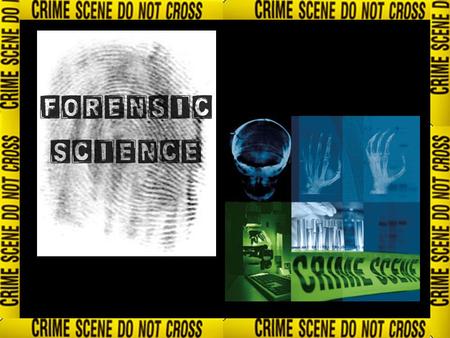 What is forensic science? Forensic Science is the application of science to the law. It often involves police officers and scientists from many branches. 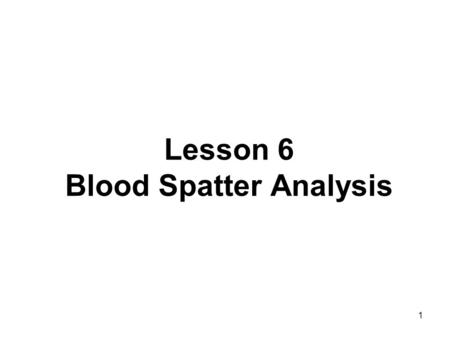 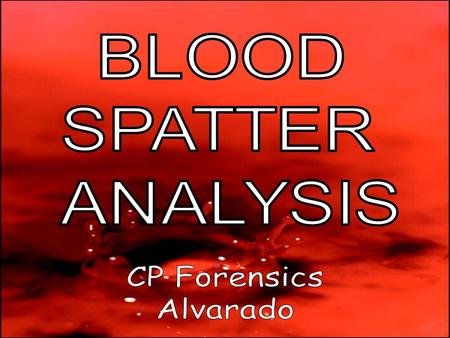