EUROPEAN COLONIALISM. Colonization of Africa colonialism- the forced control of one nation by another nation.

Presentation on theme: "EUROPEAN COLONIALISM. Colonization of Africa colonialism- the forced control of one nation by another nation."— Presentation transcript:

3 Reasons for Colonization Africa has many raw materials and natural resources not found in Europe including: –cotton –rubber –ivory –minerals including gold and diamonds

5 European Influence Europeans looked down upon African ways of life. Europeans wanted to change African culture to be more like European culture. missionary- a person who goes to a foreign country to spread his or her religion Missionaries brought Christianity to Africa.

7 Great Britain Great Britain and France often fought for control of parts of Africa. The British controlled the gold and ivory trade in West Africa.

8 France The French wanted to spread their culture. Established themselves in northern Algeria and West Africa. Trade outposts were built in West Africa for the slave trade. Most of the French-controlled land was desert. They traded palm oil and timber.

Download ppt "EUROPEAN COLONIALISM. Colonization of Africa colonialism- the forced control of one nation by another nation." 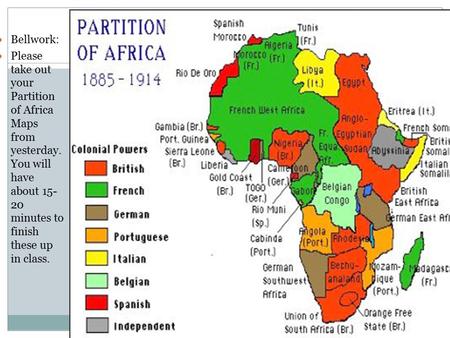 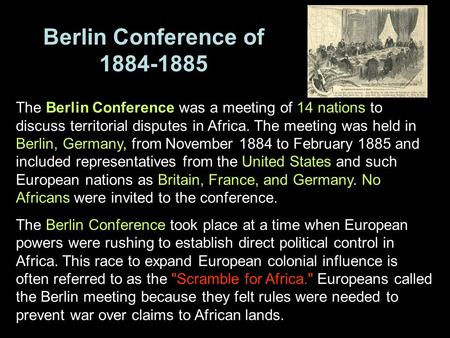